Another amusing item coming out of this recent picture is that people are apparently misremembering their icons. I am nearly certain that these young media guys flogging the THIS IS THE ICONIC PICTURE OF #BLM!!!11!!1!! narrative are vaguely remembering this picture by Bernie Boston: 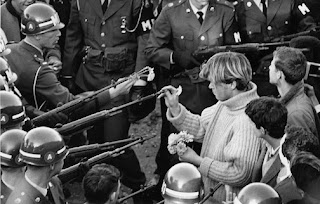 And lazily googling around a bit until they come up with this picture from Marc Riboud: 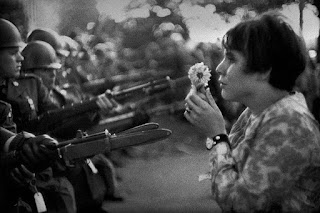 And now that enough of them have done this, the circle is complete. The latter picture, which I have I am pretty sure never seen or heard of, and which these people most likely also never have, is supposedly the "iconic" one, rather than the first one, which is probably the one they actually sort of half recall, and which is (or at any rate was) most definitely iconic.

Lewis Bush over at Disphotic most definitely makes this error, pointing us to a youtube video of some sequence from a contemporary movie which is clearly a quote not of the Riboud picture but of the Boston picture (but he identifies it as a quote of Riboud). Even better, if you poke around you come across at least one still from the movie offered up as comparisons with the new photo from Baton Rouge. Again, I think people are half-recalling Bernie Boston's picture, lazily googling around, and coming up with another wrong picture.

Of course, now that the careless twenty-somethings running the asylum have declared the Riboud picture the "iconic" one, it actually is.

Not sure what to make of this, but this kind of sloppy visual memory coupled with modern web search seems to be doing something to our visual culture. It's making it, I suppose, somehow more plastic, more changeable. We are actually watching one photograph's position in the zeitgeist get replaced by another one, or by several. That's interesting. I may have more to say about this, anon.