It is incredible to me the laziness embodies our public discourse. It's not that hard to be non-lazy, all you have to do is do a bit of work, after all. But, nope.

Consider the majors. PetaPixel is just a press-release transcribing organization, and is one of the more popular "news" sites for photography (which tells you everything, really. Why work when not working produces just as many clicks?). Recently they published a review of a cookbook with recipes collected from famous photographers. A couple of lines noting that the book existed and where it could be purchased, I count 127 words of original content, and ten pages of content copied from the book, as well as ten iconic photographs which PP now gets to publish under the protective cover of "reviewing" a book that actually obtained the rights to the photos. Of course, everyone is happy, because even this shitty non-review is going to generate a bunch of book sales.

It'd sure be great to see, I dunno, an actual review. Are the reproductions any good? Did you try out any of the recipes? Is it witty? Dumb? Do you have any ideas at all Michael Zhang?

There are some copycats out there, less successful. There are tons of blogs that mostly republish other people's redundant "street photography" with occasional top-ten lists. And so on.

Nobody pays for content, although some places have staff that work hard to grind out actual content.

Most of that is still supremely lazy, rehashed blather about why you should, or should not, shoot film or one of about 20 other standard topics. Reviews of the latest drone thing that are in no useful way a review "It flies, and has controls that let you tell it to go up and down, and take a picture, it costs this much, here is my affiliate link to amazon."

Of course, there is ToP, and there is VSL, where the lone authors work quite hard to write about things that interest them. Both do what they do very well indeed, but neither one proposes to be turning a critical eye on photography as a thing, really. Which is a shame, because there ought to be more of it.

And then we have guys like the hapless Lewis Bush, who seems to have run out of things to say. He's still more of a thinker than most of these bozos, but mostly he stops when he gets finished mouthing the standard leftie/artist political positions.

Let us take a moment to correct his latest post. He pretends to be commenting on visual culture, but it's a very very thin nod. He notes some superficial resemblances of the RNC stage to some of the well-known stills from Leni Riefenstahl's "Triumph of the Will". I will note in passing that in the first place there's a great deal more to the film than the still we all associate with it: 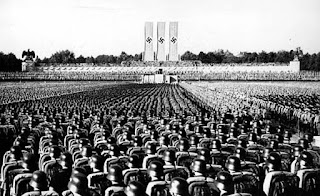 And also that when you actually do the side by side comparison: 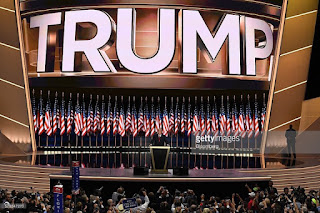 well it's a bit embarrassing, isn't it? Yes, the one evokes the other in a small way, but it's got nothing to do with Hitler or Trump specifically, this is just standard Big Politics Theater, they all kind of look like that with, in this case some little differences that Lewis misses completely. What distinguishes Hitler is that he did it on a monumental scale that we seem to be actually incapable of remembering. Every time I see that still from the film I have the same "Holy Shit!" reaction.

No, what Lewis (and his citations) are all doing is simply, lazily, regurgitating the "Trump is awful, why, he's basically Hitler" line without bothering to perform any of the relevant analysis. Neither political, nor visual.

Let me dispose of the Trump/Hitler comparison. Hitler was a lot worse than this, and every, stage of his career. Trump is in comparison a completely benign presence. Go look it up. Hitler's awfulness is another thing we seem to have trouble remembering except as a sort of abstract notion of more awful than anything. While Hitler is a pretty good standard for Worst Case Awful, we tend to lump everything more awful than free ice cream as Worst Case Awful, and we forget the gradations.

And now, let me proceed to do Lewis' job for him. He purports to be interested in visual culture, so let us actually look at the iconography of the Trump acceptance speech, and think about it a bit.

First of all, most of what we're looking at is political-staging boilerplate: the flags, the seething mass of political operatives on the floor, the tiny podium on a big stage. In different angles we would no doubt see tons of Make America Great Again signs and so on. What jumps out to me is the large word TRUMP over the stage, and the weirdly Academy Awards styling of the stage. This thing doesn't look like "Triumph of the Will", it looks like an awards show, and in a way it is.

Poking around the interwebs, I find many pictures of political speeches none of which feature these styling notes. While it's possible there was a giant BUSH logo or CLINTON logo suspended over the candidate, it didn't get photographed, which is the salient point here. The vaguely art deco sculptural gold paneling is completely absent from the political stage until now, as near as I can see. But it is absolutely SOP for an awards show, innit?

The parallel that does exist between Trump and Hitler is this: They both rose to power pandering to the disenfranchised, those people who correctly see that the structures of power are exploiting them. Trump is to Bernie Sanders what Hitler was to the Communist party in the Weimar Republic.

It turns out that when you have two bodies pandering to the weak and disenfranchised, the latter tend to align with the one that looks strongest, almost regardless of what it actually said.

The iconography of Trump's acceptance speech becomes clear, then.

It's styled like an awards show, a populist invention if ever there was one. It has very strong branding, TRUMP, in huge letters across the top. Trump has crushed the Republican Party and bent it to his indomitable Will, hasn't he? And he's made the RNC into a Awards Show! It's pretty much the same as the Grammys! Just for you! Two big thumbs up! How great is that!

Hey Donald, imma let you finish, but first I wanna say that Hillary Clinton had one of the greatest acceptance speeches of all time!

His role as a panderer, and as the strongest one, is well established.