Updated. See the ETA below, inserted in the topically proper location. 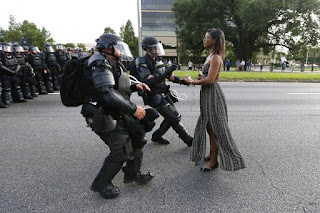 It's a hell of a picture, no way around it.

But it's not Tank Man, it's not any of the various pictures from the civil rights movement. Although, I admire everyone in the picture, in a way, except for one. The photographer should be smacked. Still, Tank Man was taking a real risk (and for all we know, died as a result of his actions). Civil rights activists were actually mauled by actual dogs, and so on. This was, like Tank Man, a scene deliberately constructed by the protester, which places it in a category. It was constructed, unlike Tank Man, at very little risk to the protester, which places it in a smaller and less interesting sub-category.

Let's clear away some underbrush. As far as I have learned, the woman was engaged in a basic act of civil disobedience. Good for her. As far as I can tell, the cops did their jobs professionally and calmly, without drama or rancor. Everyone moved through their appointed roles in the approved fashion. Do those cops know they looked like assholes? Of course they did. It's part of the job. The point of civil disobedience is to force the authorities into situations in which they or their appointed servants look like assholes, until they get sick of looking like assholes all the time and enact some changes. Props all around, more or less.

Is the picture a good piece of social commentary? Yes, in a way. It juxtaposes certain things and displays a sort of allegory of the current narrative pretty well. It speaks to excessive militarization of the police, which is a pretty legit political position to be taking these days. It's not like only crazy communists are saying maybe the cops are little too SWAT and not enough Friendly Officer Bill these days, lots of sensible people are saying that. You may or may not agree, but it's not some weird fringe position.

The trouble with the picture is that the immediate narrative it suggests most strongly is outright false. The police were caught mid-motion, in perhaps some kind of weird stutter-step. Those unreadable postures (possibly perfectly natural, like Muybridge's galloping horse, a moment we normally do not perceive has been frozen for our delectation) together with the riot gear are highly suggestive of imminent violence, of an explosive situation. The photographer, we may justifiably assume, shot a bunch of frames before and after the one he chose to show us. Those frames, we might reasonably guess, depict bored cops calmly moving up on a civil disobedient and arresting her, without a drop of drama. This, however, is the frame we are shown.

ETA: There is indeed a sequence of frames which has indeed been published. They show, clearly, some cops hustling up to a woman who does not resist, and hustling her off. They are not obviously bored, the vibe is to my eye much more "gotta get this woman outta the street gotta get this woman outta the street gotta gotta get" and off they hustle, no fuss, no muss, no bother. The weird posture is "hustling cops" frozen in time. Interestingly, once you've seen the sequence, the weird posture is a lot less weird looking and the original picture seems a lot less charged. I remember distinctly the sensation of violence on the verge of explosion, but I no longer see it in the picture. The veil has been removed and the picture is much weaker, but much more true, to my eye. Neat, huh?

This frame, presumably, meets the laughable standards of The Press. No Photoshop! And yet it is a lie, it strongly suggests something that never happened. That suggestion of violence, of something unreadable but probably bad, is a real part of the picture's power. But that suggestion is, by the photographer's own account, completely false. There was never a sniff of such a thing. This was a peaceful protest, the police presence was professional, calm, and reasonable, the selected civil disobedients were scooped up in the approved fashion, and everyone was released the next day.

This immediate falseness damages the picture as a piece of larger social commentary. While it does indeed depict a relevant political idea, it is damaged by the facts of the case. That the woman in the picture chose, at low risk, to be arrested damages that sense of danger. The fact that there in fact was no danger certainly damages that sense of danger. Without the sense of danger, it tends to fall apart into a line of bored dudes sweating in heavy costumes, and a pretty woman in a really great dress. Pictures of this sort only really work when they both support one side's position, and stun the other side into silence, or at best incoherent blather. Sontag was right, the story that is ultimately wrapped around the picture is the important part, the picture is just the tip of the spear.

This is exactly equivalent to Diane Arbus' roll of boring pictures of some kid playing with a toy hand grenade, with one frame where he happens to be making a weird face. That's the frame she prints, because it's awesome. But it too is false.

Compare also with Gene Smith's "Tomoko in her Bath" which is "photoshopped" all to hell. Today's NYT would probably refuse to publish it. But it is far more true than the picture we're looking at here. Everything important in the frame is true. The mother's love, the child's deformity, the tragedy. The narratives that picture suggests most strongly are all precisely true, even if the rendering of the shadows is not.

That the press is, apparently, propagating this thing all over and promoting it as "iconic" and so on speaks, loudly, to the bankruptcy of that enterprise.

But you know, it's still a hell of a picture.