When we see stuff, especially media stuff (photos, text, movies) we tend to skim through it at some depth or another. Sometimes we scan for a few key phrases, sometimes we look very very closely and thoroughly. As we go, we construct a mental model of what we're reading, seeing, watching.

It is this mental model that we respond to, obviously. It's literally how cognition works. You gotta get it in to the brain in order to think about it, and you gotta think about it to formulate a response.

We've all seen the internet comment from the guy who obviously hasn't read whatever it is he's replying to. What he's done is skimmed, lightly, and decided that whatever he's replying to is probably at Standard Position X, and since he is at Standard Position Y, it is time to unleash Standard Diatribe 13.7. He's using a shortcut to skip most of the actual reading and get down to the good part, the furious typing. Still, we all do it, because this is literally how it works, right? Some people just do a better job of making an accurate mental model than others do.

The mental model is always colored by our biases, our opinions, our politics. Further, worse, it is malleable. Poking at it, thinking about whatever we just read, saw, watched, can change this model.

Take, for example, these two pictures from some weird location on the border between the Koreas, where diplomats (apparently) go, and where North Korean soldiers are always peering through the windows and taking photos. I have no idea what the hell this place is about, but there it is. Anyways: 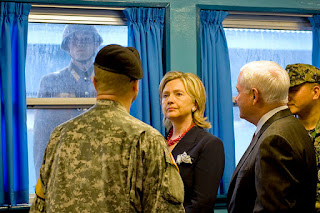 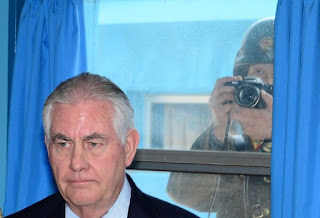 These are essentially identical pictures of Secretaries of State standing in front of a window ignoring the North Korean dude on the other side of the glass.

The place I saw these pictures, at Reading The Pictures produces for us a wild reading in which Tillerson is, in some vaguely defined way, a complete incompetent and a boob, while Clinton is masterful and awesome. This is raw, unadulterated politics. These people are almost literally not looking at the pictures at all. The model they have in their heads is pure politics, and almost nothing about pictures.

Now, RtP is pretty much in the business of providing wild politically motivated "readings" of pictures, but it's still an interesting case. We all do it. I will have more to say about this when I talk about Vivian Maier in, um, the next few days I hope.

As an amateur critic, I write, and then I go and look at the pictures again. Frequently, perhaps every time, I find that I've gotten carried away talking about the finer details of what I think I saw, and which I didn't really. My model was wrong to begin with, or (sometimes and) it changed as I thought and as I wrote. Especially if I'm trying to get pretty deeply in to something, trying to tease out nuance and detail.

This last bit can actually be quite handy. In a sense, if you're careful, what you're doing is trying out theories. You have some notion of what you saw, and then you imagine what that could mean, you fill in details based on what you think the author or artist might have been going for. Then you have to go back and check. Sometimes real insight can occur, but much more often it's just bunk.

If you want people to "see stuff" in your pictures, supplying some words or other materials to guide their model building can work wonders, but it can also raise serious ethical questions. Rather than bitching about how some guy 'shopped out a whatsit on that one news photograph, which affected nothing, why aren't we concerned about the wildly biased article which accompanied the picture? The first few lines of that piece have surely done more to color what the average viewer "sees" in the picture than any minor photoshopping.

Art, thank god, does not have this problem. If I want you to see this as a Nude Descending a Staircase, well, nobody's going hungry if you do or don't, so whatever.