I want to write something about criticism, and the natural title here would be something like "Toward a New Criticism" but I almost choked to death on my own bile trying to write that, so, nope. Anyways, here is another quote from Jörg Colberg of Conscientious Photo Magazine, from this piece:

In addition, the problems with the current add-on approach becomes vastly bigger once we’re dealing with artists outside of the larger context of Western culture, for whom the likes of Walker Evans or William Eggleston often are simply completely useless reference points.

I am going to construe this broadly as a request for someone, for the academy, to produce a new model of criticism for photography. As I have mentioned before, I think I am whittling away on that in my own small way, but for the moment I want to poke at the "outside the larger context of Western culture" elements a little. I think Jörg is right that this is a problem. I am spending some time explicitly looking outside the west for photography, and I am finding it... interesting.

Let's start with cphmag's most recent piece. Margo Ovcharenko is a Russian photographer that Jörg interviewed. To my eye, she takes the same boring shit every western art student shoots. Gratuitously naked pictures of her friends looking every-so-languidly bored. A bit like Ren Hang, but with less graphic design and without a shred of humor. She mouths the usual shit about how a portrait really contains the photographer and the viewer as well, and how her work is political, and how she spends a lot of time looking at Constructivist Art and so on. There's no evidence I can discern that she has a single visual idea, or anything whatever to say. "Being queer is super hard, here's some pictures of naked queer people" and so on. Being queer is super hard, but it's not clear how random photos of naked gloomy queer people is relevant.

But step back a little. I have spent enough time with Russians to know that politics means something quite different to a Russian than it does to me. Something largely incomprehensible, and infinitely depressing, although they seem to roll with it OK. It is possible, I have to admit, that Ovcharenko is in fact making clear political statements that I am simply missing. Does the pattern of that tattoo mean something? Does the dress on the wall immediately jump out to the Russian as meaningful, or is it just a dress? Ditto the giant book.

I don't know. Given the "tells" in Ovcharenko's blather, I suspect the answer is "no" and that she is in fact a privileged child, fully engaged with the western student ideas of modern art. But I don't know and further more I can't know without spending a decade in Russia. At least.

Let's take a trip to Africa. Russia has long been connected to European culture, although never quite of it, and so perhaps there's more commonality. Africa is a different story, and not a story I care to start trying to tell, not least because I would botch it. Here's a picture from this set of pictures, "The Wall of Men": 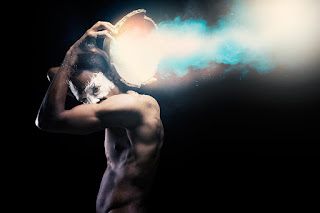 What can I say about it? It's striking. It's not a typical western picture of Africa (which is all fat dictators, starving children, people in brightly colored tribal dress posing for the camera, and elephants). I like it.

But what does it mean? I have no idea. I can make no sense of anything. The face paint? The ... is that a broken bowl? the shell of a huge nut? What about the light flowing from it? The picture seems to be called The Ash, which doesn't help me at all. Maybe none of it means anything specific, but perhaps every aspect of this picture is rife with meaning for someone from the right region of Africa. I don't know and further more I can't know without spending a decade in the right part of Africa. At least.

Here's another picture, from Desta for Africa Creative Consulting (DFA). Their Photography link has a bunch of work that is dictinctly non-European/American, quite striking, and again not at all what the west thinks about Africa: 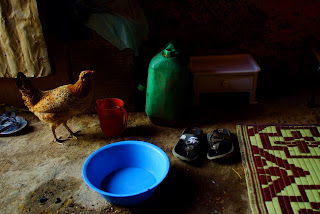 This is a picture that certainly could have been taken almost anywhere. Chickens, flip-flops, plastic objects are global. But what does it mean? In the USA this would almost certainly be some sort of vision of poverty. We're left with the idea of a chicken inside a human habitation, someplace you would take your shoes off. In the USA, this probably means The Deep South and it probably means Poverty.

What does it mean in Ethiopia? I have no idea. Maybe it means exactly the same thing, maybe it's just an attractive picture of normal home life, or an obvious reference to a specific kind of a religious structure/context. I don't know and I can't know with putting in the time.

What I mean, throughout, of course, is that while someone could explain one picture or another to me in a few minutes, or possibly even seconds (err, yeah, that doesn't mean anything in Ethiopia either is always possible), I cannot gain facility with understanding pictures in general without being steeped in the culture.

If Jörg Colberg is asking Westerners to criticize pictures made globally, it's a fool's errand. So let's assume that's not what he's asking.

What he's specifically asking for is a framework which allows, which embraces and welcomes, which includes, international work. Perhaps, then, what he's asking for is simply room for critics from other nations to tell us about their pictures. In the west we usually don't see pictures of Africa made by Africans. When we do, it's probably just a packet of pictures thrown, as it were, over the wall. We have no context. In order to make any sense of these things we actually need to see some criticism, that is a large part of what criticism is supposed to do after all.