Copyediting and proofreading (which I am ruthlessly lumping together here) are hard. Getting out all those typos, the bad line breaks, the orphan lines, the leftover lorem ipsums, the accidental mis-fonts, that's hard. In my experience, you never get all of them out.

Getting as many of them out as you can is critical, though. When someone hits a typo, their hackles go up and they start looking. If the spot another one too soon, they're going to start thinking the publication they're holding is sloppy, lazily done.

"Emulsion" magazine's text is, by my estimate, something like 10 to 15 thousand words long, and contains more than 40 individual typos and minor errors that could in principle have been caught by any kind of close reading. I proofread it, not correcting layout problems like orphan lines, not correcting font usage, not correcting mangled sentences, not correcting language usage. Just misspelled words, missing spaces, things than can be fixed with a couple of keystrokes without altering anyone's voice or sense. I came up with 40, and I know I missed at least a couple which I noticed earlier and did not catch.

This is an appalling error rate. There are probably a dozen cases of obvious mis-fonts, a half dozen minor layout errors, also easily fixed without messing up anyone's voice. This works out to an error rate of 1 every 200 to 400 words, depending on how you count.

I claim to be able to edit my own work, to a degree, but this is because I am a magical unicorn and have written a great deal of text. I think my residual error rate, when I am working hard on it, is something like 1-2 per thousand words, which is well below "good" but also not terrible. With a magazine like "Emulsion" I would expect to be able to reduce the number of typos and other easily-fixable copy errors to perhaps 5 to 10. A second, professional, proofreader would in turn reduce that to somewhere between 0 and 2.

For a premium product, a well-made publication, the standard is that three sets of eyes need to read the text closely. This might be the author, a copyeditor, and a proofreader, for example.

Where to call the line on the design issues called out in my previous notes, and the proofreading issues here is not clear. A good editor would probably call them all out.

I'm sure that if you asked Chris, he would tell you he proofread the thing, and I dare say he actually thinks that he did. I'm sure he "read" it a couple of times. The trouble is that "reading" isn't proofreading, and it never was. Worse, the internet has trained us to read very very lightly. When what you mean be "reading" is "skimming it, picking out a few keywords, and forming a rough guess at what the author means" you're not finding very many typos, and this is exactly what the internet has trained us to do. We are presented, if we're not careful, with vast amounts of textual material. Much of it is short and dunderheaded, so skimming actually works pretty well.

Chris doesn't even seem to care enough to draft a friend to read it. Or perhaps he did, but he recruited friends who didn't actually read it. He could have asked me and I would have done it. I'd have given him 100 corrections, and if he'd taken 80 of them the magazine would have been vastly better. If he'd taken them all it would have actually been pretty good.

Chris claims to have "only made about $1000 on this" which is incredible to me. He made money? Astounding!

He could have spent $500 of his profit on a professional, and made the thing infinitely better. If he'd done that, as well as laying the whole thing out again, this time not stupidly, it might actually have been quite good. But that would have taken $500 for an editing service, and 20 or 30 hours of layout work, and Chris simply cannot be bothered to do that.

Possibly, there is evidence to suggest it, Chris literally has no idea what a piece of dog shit he has produced.

This thing is an insult to the artists who contributed to it. If I were one of them I would have spent quite a lot of time on the phone screaming by now. This guy is actually still promoting and selling this thing, which makes everyone in it look like a shithead. 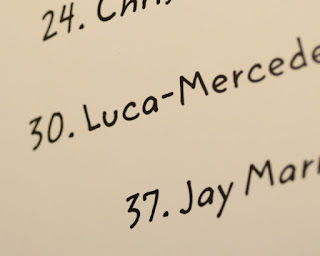 No italics? Also 3 of the ToC entries have the wrong page number

I caught Meercedes, but not Nikes. One error can mask another. 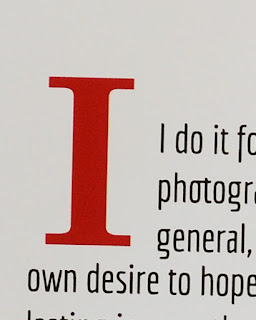 Drop cap "I" followed by "I" in running text. Not easy to see. 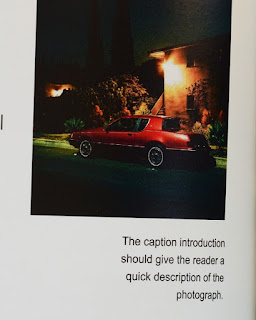 Captions are invisible unless you check them specifically.


And to be honest it just goes on and on and on. These are all in the first 4-5 pages.

Get a hardcopy of the thing, and a highlighter. Or, if you want to be awesome, go learn all those cool copyediting marks. But they won't cover things like "picture is too small" and whatnot.

Read the text out loud, and slowly. This will be agonizing. When you see an error, mark it, and carry on. In ten minutes, you can read a couple hundred words. Go take a break.

Go through it again and look at the pictures themselves, check margins, sizes, balance on the page and so on.

Go through it again and check relationships between pictures and text. Check the captions again, and any textual references to pictures.

If there are technical things like tables of contents, figure numbers, lists of figures, devote one pass to nothing but checking those. Are the page numbers right? Are the chapter numbers in sequence, or did you skip/duplicate one? And so on.

Did you find any particular errors that might be duplicated and hard to catch: inconsistent paragraph indents, incorrect font family or size (especially if it's close to correct), that sort of thing? Devote a pass to nothing but those. Make a list: "body font", "paragraph indents", "captions should be italic" and check every single paragraph one by one.

All up this is going to take many minutes per page. 5? 10? This is hours and hours of drudgery. A fifteen page book is going to take 2 hours of labor, spread out over time. Don't do it all at once. You'll burn out in something like 20 minutes to an hour, and be no good, so knock off and pick it up later.

Having done all that, if you're trying to make something that's actually good and you want it to be widely distributed, pay a service to copy edit, and to proofread but only after you've done your work. If your manuscript is a blizzard of stupid, they're going to miss more stuff, so try to make it a gentle dusting of stupid, and then pay. You're paying by the word, not the correction. Fewer corrections means more awesome corrections.