I am definitely fumbling my way here, so even I'm not sure any of what follows is right.

In my previous remarks, I closed with the notion that to really photograph well one needs to be simultaneously exquisitely aware of "the forest" and oblivious to it.

The test of a first-rate intelligence is the ability to hold two opposed ideas in the mind at the same time, and still retain the ability to function.

Now, F. Scott Fitzgerald may have been on to something here, but in the first place I am perhaps not a first-rate intelligence, and in the second place that is to kind of miss the point. Adding further clutter to the mind does not in any way I can see aid us in the contemplative seeing part of the business. I dare say Fitzgerald did not have writing in mind when he wrote this, either.

I think that in practice the two opposing principles are stances that we switch between. In one moment, we have in mind the forest, the context and story to which we are directing our attentions. In another moment we are meditatively gazing through or at the finder, looking for that juxtaposition of forms, that expression, that play of light.

When you're in the second condition, though, you need to somehow carry with you the homeopathic imprint of the former state, otherwise you're just shooting vacuous exercises in form again.

I use shot lists, shooting scripts.

For my current long term project, documenting my alley, it has occurred to me that the cats are part of that gestalt. And so, from time to time, I pick up the camera to take photographs of cats in my alley. When I'm framing up the cat, I am interested in placing the cat against a fortuitous background, in getting close enough to the cat but not too close, in waiting for the fortuitous gesture from the cat. I have learned that the cats, which I think of as "in the alley" are frequently not in the alley but rather on someone's back steps, or curled up in a car port. I am contending with this - do I expand my scope outside the literal alley? Or do I focus on those moments when the cat is in the alley proper? Should I focus on the cats in motion, to suggest that the alley is a route rather than a resting place? Etctera. 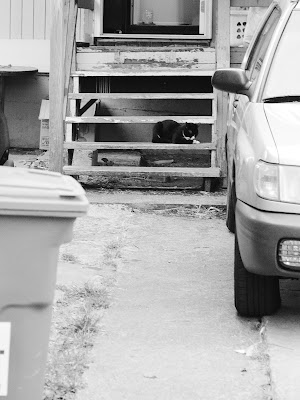 My shot list grew to include "pictures of cats", which was the imprint of the story I carried with me into the alley, camera in hand. I shoot the cats, as contemplatively as possible, ignoring the forest. And then I learn that the forest is not quite what I thought it was, and around we go.

On quite another note, a friend requested some head shots of herself, for a small business she is re-opening. Her hair is different, the old ones won't do. We met at City Hall, which has a 30 foot wall of glass block and therefore the most beautiful light. I brought my five year old, having no place to park her anyways, and I felt it would add some energy to the situation anyways. We talked (the "client" and I) about what she wanted. Not formal, smiling, open, friendly. My friend, like so many people, is awkward in front of the lens, and dislikes looking at the camera.

My shot list, my shooting script, was simply to get an open, friendly, expression, looking directly at the camera. 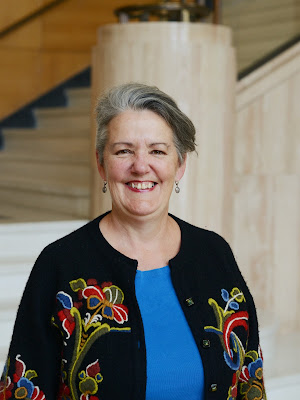 At this point I tried to be that contemplative guy, just looking for the moment. My friend was watching my kid run around, and talking to her. I learned that if I spoke to my friend, engaged her, she would turn momentarily to the camera, to me. So that's what I did. I let the friend and the kid interact, and every now and then I'd ask a question, engage, and snap that moment as she turned, still smiling. She likes my kid.

So in both cases here, and this is typical for me, step one is to attempt to get the story straight ("be aware of the forest"). Then take pictures, without thinking much about the story ("oblivious to the forest") but only about what moment, detail, element I am looking for.

I am pretty sure this is more or less the template for a large variety of successful projects. Roy Stryker used shooting scripts to direct the FSA's photographic project, and probably borrowed the method from his earlier work. It turns up commonly in the "creative brief" component of commercial work. I think many a long term fine art project is driven by such a thing as well, albeit perhaps somewhat informally.