The previous remarks are, as everyone seems to have noticed, satire. The picture was in fact shot with an 8 year old Nikon D3100 (bottom of the line even then, a whopping 14 megapixels), and I wish I could say I nailed the exposure, but my exposure is generally pretty haphazard.

While the previous piece isn't a specific mockery of a specific "street" shooter, my broadly based satire was triggered by a specific piece by a specific hapless victim. This is the true story.

One my my regular readers (Thank you, DM!) directed me to Patrick Laroque (I guess I should just call him laROQUE, though) who appears to be a deep well of unintended comedy. Yesterday I read this piece of his, because I like sequences and process, and the title seemed to suggest something about that. It wasn't.

He begins by explaining how he keeps moving, doesn't set up someplace and wait, and then he gives us a sequence of photographs he took by setting up and waiting. Which I found odd. He claims to have shot his sequence in 11 seconds, but given the degree to which the shadows move I have to admit I am dubious. I mean, these things weren't shot 20 minutes apart, and anyways it depends on how far the shadow is from the thing that casts it. But I am dubious.

I was also struck by how deep the shadows in his pictures are, and I was reminded that this is a thing.

Being attuned to this stuff I happened to notice a strong shadow on a wall, while on my way to do a little shopping. Self, I said to myself, in a couple hours those are going to be strong diagonals. And so a couple hours later I took 15 minutes from my busy day to walk back over, and spent 5 or 10 minutes shooting. Despite the cars and my inability to remember how to stick my camera into multi-shot mode I got a solid half dozen frames out of 3 or 4 people walking through my little setup. The one in the previous post was the most dramatic, which I then cropped square (natch), plunged the shadows into the very pits of hell, and finally oversharpened a bunch.

No instincts at all. No luck at all. Nothing but an understanding of how to grind out a certain trope.

In reality the scene looked a lot more like this: 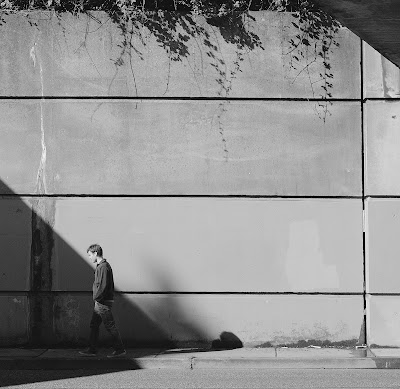 In real life shadows cast by the sun tend to be pretty open.

Backing up. This is a trope that a lot of would-be street photographers deploy. The deep, and sharply defined shadow, slashed across the scene, and the human figure in it. It looks dramatic as hell, and you can wrap some story around it about isolation in the urban environment or whatever. You could name any number of internet-famous "street" photographers who roll this thing out constantly.

The world doesn't look like that. In real life shadows cast by the sun tend to be pretty open.

I think these things appeal to the gearhead camera owner, because they're pretty algorithmic. There's a well defined process you can simply follow, and you get this great modernistic feel, this sense of design and precision that appeals to your gearhead following for the same reasons it appeals to you.

They're also very very easy to do. All that is required of you is to recognize a strong graphical setup of shadows, or the potential for such a setup. Then you go there, and you wait until someone walks into the frame. Then you press the button. You can do the same thing with blotches on walls, with road markings on roads, or with advertising posters. You recognize the setup (which requires some practice) and then you wait.

If you do it with enough megapixels, and enough blather about shot discipline or about honed instincts or deep study of old masters or cinematography, you can get some people to sign up for your workshops.

The easiest things to shoot are just the things in the world. Things don't move around much, and they don't complain, and they don't present the worrying prospect of interaction or confrontation. The perfect subject for the shy street photographer. I do this a lot, and I can attest: easy.

What's actually hard is human interaction, human emotion, because you've generally got one chance. There might be another chance for a different shot in a minute, but that shot is gone.