In what follows, I mean story in the wideest reasonable sense. You can probably substitute context without any trouble. I am also going to ruthlessly use male pronouns, because in almost all cases the archetype I refer to with the pronoun is male.

Every photograph has a story. Well, it has several, and potentially has infinitely many different ones. The first story, though, is the one about how it was taken. This story is inextricably bound up with the story of what's in the frame, how the subject matter got there and where it's going. This story is that essential no shit, there I was, and then... story. This is the story that makes a photograph a photograph and not a painting.

Suppose that you've photoshopped a picture. You've removed a sign, deleted a logo from a hat, removed a power line. You've altered the facts of the picture in some way.

If challenged on this, you are quite likely to say assert that this is OK because all that matters is the final result. Process, you might cry, does not matter. And, sure, who am I to deny you?

You can still tell those stories, but if you're honest, you must also tell the story of how you used the clone tool to remove the logo on the hat, and at that point nobody cares, they wander off, and you've lost them. That's not a story about the picture, it's a story about you.

And so it is with all made art. A sculpture, a painting, a collage (even of photographic material, cf. Michael Chisholm and his spirit guide Hannah Höch) these are all the fruits of the artist's mind, not the (direct) fruits of the world. We expect of these things that the story be the artist's story, not the world's.

Indeed, there are fairly straight photos which are also, really, just the fruit of the artist's mind. This, for instance, is really just an illustration for an essay, although I made it with a camera and, while I plunged a certain amount of material into darkness, did not otherwise substantively alter: 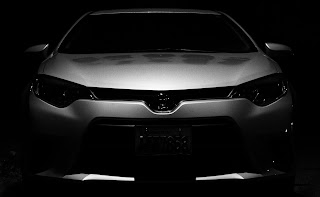 People argue, at length if you let them, that "all pictures are processed!!! photoshop is no different!!!" and, while technically true, it is the refuge of a pedant who wishes desperately to continue to remove signs from his pictures.

There is a difference between on the one hand a reasonably good faith effort, limited by the capabilities of the machine, to represent what was truly there, and on the other hand a picture which specifically and deliberately differs from what was truly there. In the first case, the photographer can without prevarication, without disingenuously eliding a few details of photoshop, tell that first story, no shit, there I was, and then... In the second case, the photographer, if he is being honest, must bring himself into the story, and explain his concept, his idea of what it ought to have looked like, but did not.

Still, by doing that work, you either abdicate entirely any right to the underlying story, or you insist on supplying your own, on supplying the story of the artist and not the world.

Now, this is perhaps a small thing. A photograph can always be thrown to the ground, story-less, to be discovered by a boy, a nun, or an MFA student. The finder will supply their own story, their own interpretation, their own guesses, whether you removed the logo from the hat or not. There are those infinite potential stories that the picture might live with, some day. Those are all still there.

But that first story, the one that makes it a photograph, that one's gone, because you photoshopped it out.