Because I seem to have caused some confusion, let me elaborate.

This picture I took as a representation of the malevolent presence of the automobile in American culture: 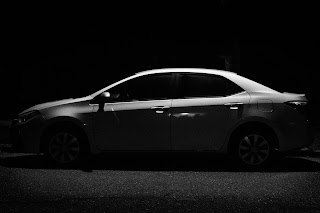 It could as easily have been a drawing. It is a photograph because I do not draw well, and stylistically the book didn't call for drawings. The true "story" here is of a car parked on a street under a street lamp. That is not the story I was interested in, that is not the story I wished to tell. I imposed my own story, one of malevolence and import, on purpose and after the fact.

This picture, from the same project, absolutely must be a photograph: 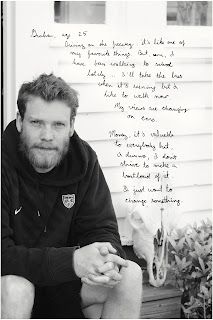 The whole point is that this is a real person, speaking real words, about real ideas that the person has. The story, the true story of the picture, the story I want the picture to tell, is no shit, there I was, talking to Graham, who is a real person.

Any photoshop work I did on Graham's face or on the background would accomplish nothing but to detract from the truth of the story I wished to tell, it would do literally nothing except undermine my goal for this picture. Therefore, I did very little. The picture is, within the limits of the machine, and the demands of the book it lives in, my best effort to depict what was actually there.

You could say that this only is relevant to documentary or news, but, to be blunt, you would be wrong.

The only reason to bother with this is because there is value in that "story", usually with two levels. A "true" story of a model and a photographer, and no shit, there we were, posing and working and, often, a second, fictional, story of a socialite, a world traveler, a diver, a sailor, dressed in inexplicably fashionable clothing. The interplay between these two stories is often explicit, and there seems to be real delight there.

And so it goes through genre after genre. You might photograph a landscape because you cannot paint, but why would I purchase a photograph of a landscape rather than a painting? If you ask Alain Briot, he will tell you it is because no shit, there I was, just as the sun was setting.