There is a thing, called re-appropriation, where one group of people takes back some sort of slur, and uses it themselves in non-slur ways. I will slide right by the obvious one, and move on to the word "bitch." The word "bitch" can be a slur in the mouth of one, but a compliment in the mouth of another. A woman seeking to re-appropriate the word, to rob it of its power, might use the word in positive ways.

That's fine, that works, we get it. The speaker here had made a thing, has made a sentence using the word. The sentence provides context for the word, which alters its meaning.

Take the word out of that context:

Now it's just a noise. It has a definition, but it doesn't mean anything in the same way it does in a sentence. It's just hanging in space. I can take it, and make something new, I can surround it with new words:

You are a stupid bitch.

But this is a thing which I made, which hasn't got anything to do with the thing the woman made earlier. The wonderful thing about words is that they gain almost all of their meaning from context.

That cupcake was soooo bitch, I ate it in like two huge bites.

Imagine, now, a novel. A hateful novel. You cannot, successfully, re-appropriate a novel in the same way. You can put in a foreword, and afterword, and three appendices, but in the end the novel is still going to be there, a large and hateful bolus. A novel is a container for meaning in ways that a single word is not.

Now, one might remix a novel, edit it, cut it up and re-arrange it, and do something that looks like re-appropriation.

You cannot re-appropriate Leni Riefenstahl's "Triumph of the Will" with a couple of inserted title cards, it will remain an eerily convincing celebration of Nazi-ism. To re-appropriate it and make it instead an indictment, you would need to substantively alter the film. You might somehow find the perfect fulcrum and do it with a minimal edit, but you have to reach inside the container of meaning, and alter that meaning.

You cannot simply use a movie or novel in a new setting and alter its meaning sufficiently.

Consider how this works for photographs. Allow me to contextualize a photograph:

Because of the central myth in the USA of individual freedom, the individual's right and power to select his own destiny, the people of the USA tend to fetishize the gun as a tool of power, defense, of self-determination far beyond reason or sanity. 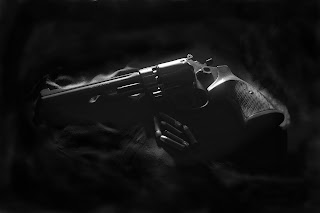 Now, as we did with the word, let us take the picture out of the context.

The photograph falls somewhere between a word and a novel, it is a container for meaning in ways that words are not, but it is generally not as complete as a novel. It's a bit of a tabula rasa, you can project on to it whatever you like, but it is still definitely a picture of a gun, styled in a certain dramatic kind of way. It is not a mere word, hanging in space, carrying only a definition but no real meaning.

Now let us reflect on the attempts by women to re-appropriate the nude. Not by photographing nude men, but by taking more pictures of good looking naked women, in pretty much the same way men have been doing for a long time now. Yes, yes, you can pretend that the photographs are inherently different, and sometimes you're right. Sometimes you're just wrong, though.

The impulse is the same as the impulse to re-appropriate the word bitch and to redefine it, by using it differently. Indeed, in the linked article, there is a quoted remark that suggests this is precisely the plan, the plan is to take pictures are use them or intend different things for them, and thereby alter the meaning. To be fair, the article also talks about taking different pictures, and taking them in different ways. But it does include a crotch shot of a young woman, wrapped in justifying text.

The trouble is that if you're naive about it, it doesn't work. The photograph is a container for meaning, and like "Triumph of the Will", you're going to have to really get in there and tinker with the meaning of the thing if you want to re-appropriate it. It's easy to take some generic photos of pretty girls with no clothes and write some bullshit about "girl gaze" around it, but you're sticking a title card with a Nazi fart joke in front of Riefenstahl's film. It doesn't work. It's still just a nude, and by ignoring the text, or simply deleting it, I can enjoy what is really just another prurient picture of a naked girl.

It happens that I quite like these pictures, so I am not actually complaining. But I am pointing out that it does not work.

The fact that such a high percentage of "female gaze" pictures seem to fall into this category is interesting and disturbing. It does not help that the text wrapped around the pictures to justify them is, depressingly often, just this was shot by a woman, and she claims the mantle of "female gaze" so this is totally not smut.

To be blunt, what is going in -- in part -- is that female artists have discovered that dressing up female nudes in the language of feminism enables the male gatekeepers, the critics, the gallerists, the curators, to enjoy the nudes they have always enjoyed without fear of backlash. If "female gaze" were truly about re-claiming the nude, re-appropriating these tropes and ideas, we'd see more men in these pictures. We do see men, from time to time, but far more often it's material like the crotch shot in the linked Photo District News article.

This is a scandal, and nobody's talking about it. Nobody is even admitting that it exists.