John Edwin Mason loves this picture of a counter-terrorism training exercise in Mauritania. He claims to have brought it up in class where, evidently, he telegraphed his affection for the picture hard enough to make his students agree with him on how great it is, and they discussed why it's great. I swear I am not making this up, it's all there on twitter. 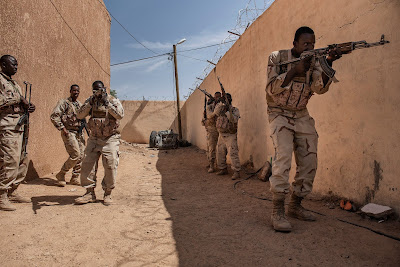 This photo is by Laetitia Vancon, for the NY Times, and I will absolutely stipulate that as a graphic design exercise it is excellent. The color palette is on fleek, the design of form in the frame is pleasing, and there's a weird sense of drama going on.

Unfortunately for John, great photojournalism uses great design to clarify the situation, and this one... doesn't. It's a design for design's sake exercise.

The question one might ask about this photojournalistic photograph is, "what the actual fuck is going on here?"

The answer is unclear. Let's take it right to left.

The dominant figure, on the right, appears to be intently tracking a lizard on the wall just out of frame. This is, god willing, an optical illusion. Perhaps there is a doorway or corner just out of frame. Perhaps he is in fact gazing intently, and aiming his rifle, parallel to the wall. We cannot tell, because the picture is framed for visual appeal, not for information, leaving our poor rifleman looking like a guy hunting lizards with an AK. His trigger disciple is admirable, though.

Next we have a group of what appears to be two guys with three rifles, behind the first figure, some ways down the wall. They are either waving their rifles around randomly, or somewhat vaguely tracking around the sky looking for threats. There are in fact three men, one is hidden (visual confusion) and while they do not have their rifles in a safe rest position, they appear to be looking at the camera rather than sighting along their weapons. They are rather less engaged that the rightmost man.

To be honest, they look a bit like dangerous bozos waving their rifles around in one direction while looking in another.

Next we have some guy apparently pointing his rifle at the camera. Closer inspection suggests that he is intent on a point somewhere over the camera person's right shoulder (perhaps the same area the rightmost man is covering?). It requires close inspection, however. His rifle is foreshortened into a visual muddle which takes real effort to take apart.

The leftmost pair have their rifles down. One is in motion, stepping apparently behind the figure aiming past the camera, perhaps checking sightlines? The very leftmost figure appears to simply be lost in thought.

So we have two guys up front actively aiming, tracking, looking for targets to engage. Behind them, three guys with rifles up but looking at the camera. Perhaps they are sitting out this round, or preparing to step in to the exercise a moment from now. To the left, we have maybe two trainers, one active and one, um, not.

My best guess here is that we have a moment of transition. An exercise has just begun, the players are beginning to move. Trainers are ready to make corrections, other trainees are awaiting a cue. This is an inherently muddled moment, a moment that is neither one thing nor another, but rather the interval between two things.

If it's not a transitional moment, I seriously have no idea what the hell is going on. Who are those two, oops, no, three guys in back and what are they doing? What is the guy on the right so intent on? Why is the guy on the left so spaced out?

It is kind of an anti-decisive moment, it is the moment when things reach a crescendo of unclarity, that moment that is least characteristic and revealing of the unfolding event. There are at least three visually confusing muddles in this thing, one of which I am unable to sort out at all. Mood/motivation are completely unclear in at least 3 of the men, and only to be guessed at in two more.

The picture, unfortunately, lends itself to being read as a buncha dumb Africans fuckin' around with gun.s I mean, it's not this is buncha assholes standing around in the street shooting into the air, but they're not exactly coming across like a crack team of ninjas, either.

I'd like to be able to say something glib like "if these were photos of an LAPD counter-terrorism exercise it wouldn't look like this!" but google suggests otherwise. If anything, LAPD counter-terror training looks weirder and stupider. You have to google for the Israeli equivalent to get the movie-poster dangerous assholes in a badass ensemble pose shots.

But the design of this one is very nice.