Here's a picture to look at. Readingthepictures.org had something to say about it, which I will read later. I have some guesses, but ultimately I don't care.

Read it. Predictably, it's a recitation of their political stance with only the vaguest reference to the pictures, and a merry round of imputation of motives to the people in the pictures which is exactly the kind of thing that stands beyond the boundaries of what a photograph can tell you. 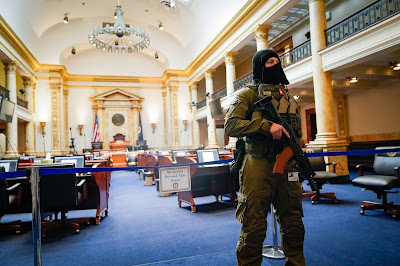 If you know what the picture is of, your reaction will be almost certainly almost 100% dictated by your politics, so let us try to set that aside and instead see what there is to be seen.

We see an armed figure, in front of a more or less grand hall. The room behind the figure looks official, fancy, governmental. The flag indicates the USA. Behind the figure there is a sign indicating NO ACCESS. The figure occupies the approximate position and attitude of a guard, although one would expect a cheap polyester uniform and, at most, a sidearm on a guard located there, not this quasi-military figure.

The figure himself is not military. No insignia, and the "uniform" is honestly not that well put together, stylistically. The mask suggests a, um, looser organization.

The angle is quite low, and the lens is wide. We're fairly close to the figure, the photographer was at some pains to make him "loom" in a slightly authoritative way. The frame feels tilted, although it is not, creating maybe a sense of dynamism in an otherwise static tableau. As a side note, the apparent vanishing point of the architectural features of the room more or less exactly balances the armed figure in the frame. Arnheim's chapter on "Space" in paintings, which I just read, has a lot to say on these things.

This sort of visual suggests either an invader guarding a seized property, or a defender protecting against such invaders who are presumably imminent (otherwise we'd see a rent-a-cop not this guy). The character of the figure's dress and arms speaks of an emergency, or dire circumstance, but we're free to interpret the role of the man as defender or invader. To my inexpert eye, he appears to be handling his weapon in a safe and responsible manner (muzzle to the floor, trigger finger lying alongside the guard.)

This might be considered to reference movie and video game posters. It takes no time at all to dig up this promo for a popular war game: 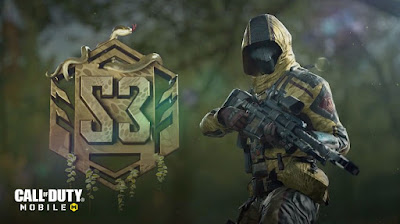 which picture has the same ambiguity. Is this a good guy or a bad guy? Note that unlike the guy above, this rendered figure is handling his weapon like a moron.

This poster styling was created entirely by the photographer. This is, ultimately, just some mook with a gun standing there. He could have been photographed in a dozen different ways, and the photographer chose this one. We might, tentatively, suspect that the photographer was going for some commentary on the ultimately theatrical nature of what's going on here. But then, real wars are generally given to us as theatrical entertainments too, aren't they? Where is the line?

This guy is, it turns out, one of a group of gun-rights advocates who spent some time wandering around the Capitol building of Kentucky's legislature. He and the people on his side of the political spectrum certainly view themselves as the good guys, defending the rights of American Citizens. And, to be fair, that is exactly what he is doing. Under contemporary interpretations, these are rights held by American Citizens, and public exercise of existing rights is a long-standing and well-recognized method for defending rights. What these guys are up to has a lot in common with walking a path annually to assert and maintain an existing right-of-way.

Obviously there is an opposing view, one which I hold, which is that these rights are stupid and ought to be reduced. We see this fellow as an invader, defending a seized property (the legislature of Kentucky in this case) and would prefer to see him ejected. This is, shall we say, an ongoing debate in the USA.

Notable among the things we cannot see is any real estimate of the man's character. We cannot tell if he is a hero, a coward, a racist, or just someone's son bullied in to showing up here and feeling like an idiot. We can, at best, tentatively assign him to a political movement, and then recall things we have read about beliefs generally held by members of that movement.