The shortlisted entries for the MACK Books First Book Award are all over one of the tiny corners of the world of photography, a corner I inspect regularly. It's interesting. These are all established mid-level artists, and all are presenting what amount to finished books. These are not rough concepts, not prints pasted into a notebook (as Colberg recommends), they appear to resemble commercially-made books as much as possible.

Mid-level artists and up is MACK's bread and butter, of course. They're not in the business of breaking new talent, they're in the business of doing books with people who have exhibited, won or nearly won a few awards, and shopped a couple book dummies around the regular circuit. The cynic might say "artists with an established track record of spending fairly copious amounts of money in search of advancement."

Anyways, as noted by the illustrious Mr. Smith in a comment earlier, these books are all, um, of a type. They are all, with one exception, firmly within the bounds of standard issue glum MFA photography, which again is MACK's bread and butter. The books range from My Sad Project all the way to Huh?, again, with one exception: SHIFTERS seems to be utterly mad and potentially delightful. It has, I predict, no chance of winning, because it is charming, delightful, and would be insanely expensive to make (746 pages!)

Here is a picture from one of the books: 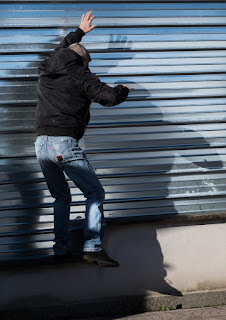 This is a photo by Andrea Alessandrini, from his Piccolo Russia project/book. While there are many ways in which it is not typical of all the work, there is one essential way in which it is completely typical, characteristic.

It is almost completely unreadable.

Photographs show us certain ground facts, some or all of which we note when we look at the photo. These facts, their arrangement, and so on, suggest or evoke something. The picture invites or suggests one or more narratives, explanations. We might tend to feel a certain way, and so on. Photography until recently has been explicitly about doing this better. We are taught that the photograph should reveal, it should tell a story, it should evoke an emotion, and so on.

Just as abstract art arose in response to figurative art (and by the freedom photography afforded artists to abandon figurative art) I think we're seeing a reaction to all these ideas, to this philosophy of photography. The point now is to make photographs which explicitly deny a narrative, which deny their connection to reality, which conceal rather than reveal.

This is a normal kind of reaction for a community to have. Such and such is rather tired and stale, let us do the opposite.

There are basically two difficulties to be confronted here.

There isn't much to distinguish these modern photos from accidental snaps. The hard thing is to reveal, to evoke, to tell. This is essentially the same argument as the one leveled against abstract art, my kid could do that, which turns out to be not entirely accurate. I don't think it's entirely accurate here either, but it's a lot closer. Making a Jackson Pollock is surprisingly difficult. Making a shitty photo of nothing is pretty easy. To get to proper MFA-level pointlessness you still have to cull, to be sure. Go out and try to make some of this shit, you can't just literally point it anywhere and bash the button. But they're still pretty easy to do.

Anyone with a camera, or even a phone, has probably made a few things in this line along the way. So, it's not like the hypothetical I could make a Jackson Pollock it's a much more concrete I have made a bunch of those.

The second difficulty is that, as far as I can tell, this is an unconscious trend. We get occasional junk like the review of HORIZONT on ASX: The camera wasn’t meant to work this way, producing images that push back against its discipline, against our habits of seeing which kind of leans in the direction, but mostly people are dragging out the same "critical" language as always to describe material to which it doesn't apply at all.

These pictures are not evoking a sense of place or whatever the fuck. They are not commenting on the thing, or revealing the essence of the wossname. The entire point is that they arguably do no such thing. They're defying the very idea that photographs ought to do such a thing.

I mean, kinda, anyways. I suspect that the artists themselves are not really aware that they're rebelling. They are, I assume, struggling against the visual ideas that we've been hammering for the last 150 years, and trying to find new ways to, somehow, meet the old expectations. The self-styled critics are duly declaring that they are successful, when manifestly they are failing abysmally. The whole enterprise is wandering in the wilderness.

To return to Andrea Alessandrini's photo, we can see this. Perhaps it's just an awkward momentary posture, a frozen moment of an action that, over the seconds it lasted, made perfect sense. As we see it, though, it's incomprehensible. Who is this guy and what is he doing? The picture, maybe, evokes these questions, but its complete failure to provide any suggestion of an answer leaves us (well, me, anyways) basically uninterested.

Note how common the turned back is in these things. Faces are evocative, interesting, we spin stories and ideas the instant we see them -- and so they are concealed. When we see then, the expression is invariably neutral, unevocative, demanding and suggesting no narrative, no emotion. Human figures are cropped, or turned away. Landscape and architecture is chopped down to meaningless, often confusing, details. One incomprehensible note might be framed in another incomprehensible set of material.

The effort to defy traditionally readable material has led, not surprisingly, to unreadable photographs. I think they've been so busy rejecting the details that they've perhaps not really noticed where they've ended up.

It is as if all the painters and their critics in 1900 or so had rejected every individual precept of figurative painting without ever realizing that they were inventing abstract painting.

I don't know if this place they've landed, even if it were equipped with a philosophical basis, a critical basis, would be any good. It seems anti-photographic, and in the end, it's just so damned easy and blockheaded. What we know for sure right now is that trying to make sense of this new thing using the old critical frameworks is ludicrous.