A Question of Ethics

This piece is being written with an eye to a slightly larger audience, so I beg my regular readers' indulgence as I bang on about a few points that you're probably exhausted with. Also, less swearing than usual, and again, I beg your forgiveness.

This photo is being passed around on twitter, with the accompanying caption, and has sparked the usual re-iteration of everyone's opinions. 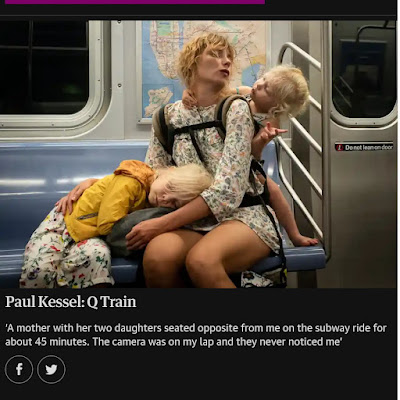 I intend to produce nothing like a definitive answer, although my opinions may creep in from time to time, but rather to provide some food for thought. Let's think about this photo.

First thought, the photographer, if the caption is to be believed, was being sneaky. Being sneaky is never a great idea, whether you're photographing someone, or cheating at dice. On the other hand, this doesn't really reflect on whether the photo ought to exist, where some uses of it might be ok, and others less ok, and so on. Nevertheless, the photographer is a sneak.

What about the photo, though? How does a photo work anyways?

A photograph is a talisman which conjures its subject. We react to the photograph, in an attenuated way, as if we were there with the subject. This is in contrast to a drawing, a painting, a verbal description, none of which evoke this visceral response. It's not magic, of course, the subject does not feel our eldritch gaze or anything like that. But, when we look at this photo we are as-if present in the subway, with the mother and children.

(Set aside abstract photos and photorealistic paintings, if you don't mind)

The mom has consented, implicitly, to be seen. She has not consented to be conjured in this way.

As photographic subjects, we know at some level this power of the photo, and (sometimes) we object. We may gesture in a way to specifically indicate I do not consent to the making of this talisman, with its power to conjure me. No. Not everyone reacts this way, not everyone reacts this way all the time. Nevertheless, social convention is that we ought to be permitted to withhold this consent. The law varies, and often does not agree, but social convention is commonly in that direction.

Note that the "harm" the photo does is not of the order of violence. The functioning of the photograph is more on the order of a rudeness, something like a stranger butting in on a private sidewalk conversation. When we look at the photo, the mother does not feel our gaze, it affects her not at all. Nevertheless, if she knew of the photo, she would know that the talisman exists, she would know that, in this one-way, attenuated, fashion the presence of she and her children can be conjured at will.

I did it just now, pasting the photo in up there. I am as guilty as any of us. I conjured her presence, for myself, for you, without her consent, and in defiance of social convention. I am being rude, right now.

Sometimes it's OK to be rude. You can shove a total stranger, if you're shoving them out of the way of a speeding automobile. You can butt in to a private conversation to let someone know the train is boarding.

With a photo, every time you look at the picture it's a new pseudo-presence, a new pseudo-interaction. Most of the time we're just butting in.

What if the mother and children were leaving the country, never to return? Their relatives might appreciate this photo, this notional usage might be more akin to "your train is boarding!" than "MY OPINION IS!"

Do these things cancel on another out? If there is enough benefit accrued, does this cancel out the lack of consent?

I don't think so. I mean, we can't help but add things up and weigh them, can we? But the fact that the train is boarding and that this is useful information does not make the rudeness go away. It is rude to butt in. The information was helpful. We can weigh one against the other if we like, but both remain perfectly true and unchanged when we do that.

The photographer is a sneak. Neither mother nor children consented to the making of a talisman to conjure. Neither mother nor children are particularly harmed by the talisman they did not consent to. Some uses of the photo might be excellent things, others terrible, most are more or less neutral. All these things are true, they overlap and interconnect, but I do not see how anything cancels anything else. They simply are.