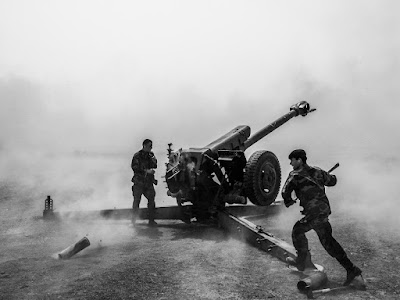 Andy's web site is here. I think it's fair to say that this photo is not much related to the things he does today, for pay. But let's look at it.

First impression is that it's a gun, and there's a couple dudes. I notice fairly quickly that one of the dudes is in motion, and there's some mist around. After another beat, maybe, you realize that the gun has just fired, there's a shell casing hitting the ground behind the gun and at least some of the mist appears in fact to be smoke drifting out of the gun itself, presumably from the recent shot.

The guy in motion is weirdly similar, to my eye, to a green plastic "army guy" figure. I almost expect a flat plastic base under his feet. But he's not a figurine, he's an actual dude, and he's on his way somewhere. He's holding a tool I do not recognize, but which is probably obvious to an artilleryman.

The dude standing near the gun may have just fired it (it looks as if he might be holding the lanyard in his left hand?) and is looking I want to say almost pensively at the gun. Possibly he's slightly stunned by the incredibly loud noise he's just experienced. He seems oddly still, feet firmly planted, in contrast to our other dude.

The ethnicity of the guys is vague. They could land anywhere in a fairly broad range. Spanish? White? Arab? Persian? Endless others, really.

The whole thing is subtle, but very dynamic once you sort out what you're looking at. It's austere in design.

Normally when we see a howitzer in action, there's a lot more crew visible. Wikipedia says a crew of 1+7 (which I assume means 8 people?) is normal for this gun (a D-30, according to Andy.) Often we see a whole bunch of these in a row, blazing away. This picture with one gun, two dudes, and almost nothing whatsoever visible in the background, is unusual. I don't know anything much about artillery doctrine. Nevertheless I look at this, and I suspect that most people would also, and I speculate that it's not a standard military action.

It puts me in mind of the C.S. Forester novel The Gun which is about a large, but single, piece of ordnance and the various guerilla crews that acquire and operate it to varying results.

Considered, as I prefer, as a device which transports us in a sense to the scene, this particular photo takes us to an oddly empty place, with no real clues as to where in the larger world it might be.

What can we make of this photo?

It happens that what we're looking at is training. This probably explains where there is only a single visible gun, presumably the British crew is training the Afghans how to let the thing off without losing their fingers in the process, and you don't need a whole bunch of guns to to that. You also might reasonably not have the crew huddled around the thing until they get reasonably skilled at not losing their fingers.

Videos of the thing going off suggest strongly that there's a fair bit of territory around the back of it where you don't want to stand when it goes bang.

Even with this part of the story, the meaning of the picture is almost completely open. We can examine it for facts, develop a complete theory of what's happening here, and still have no notion of what it means either in terms of the intention of the photographer, or even our own reaction. To a large extent, our interpretation is likely to rely on who's firing the gun, and at whom, if anyone, it's being fired.

We can't even date this picture with any precision. I don't think there's a single tell in it which narrows it down to closer than a decade or two at best (possibly the fatigues?) but the gun itself is a design that's been in use for more than 50 years. For all I know this literal gun is 50 years old. To a civilian like me, this could be any conflict, anywhere, any time since maybe 1970. I have no idea who is firing it, and no idea who they're firing it at.

In general, I disapprove of any howitzer being fired at anyone, but even for a relative pacifist like me that rule is squishy. Maybe these are genuinely good guys, and they're using this thing in a way I approve of. I have no way of knowing.

It's a photograph with real geopolitical force, it's a giant gun, it's a machine for killing and destroying, designed specifically and solely to project murderous force. This isn't some picture of a flower. You'd think there'd be some way to make sense of it, to judge it, to make meaning, but there really is not without really quite a lot of additional info.

Shells go whizzing in, shells come whizzing out. Who is to know which is which?