It recently came to my attention that there's some quibbles over when the photos in Butturini's book, London were actually made. Most sources say 1969, but one apparently suggests 1968. There could hardly be a more minor detail to obsess over, and yet, here we are. You see, I had fairly confidently asserted 1968 for reasons which I did not even remember.

Naturally, took offense at the very idea that these photos had been made in 1969, and set out to prove by internal evidence of the pictures themselves. There's not a lot to go on, but let us see what we can see.

First, a photo of a man in a hat bearing, among other things, the date "Saturday, June 21st." The days of the week move relative to the dates, so let us check June 21st for 1968 and 1969. Well, in 1968 June 21st was a Friday, but in 1969 a Saturday. Keeping in mind that this is the late 60s, and that man is wearing that hat, which he probably made himself. One might be justified in supposing that his grasp of the principles of the calendar may have been shaky. Nevertheless, this suggests summer of 1969 for, at least, this photo. 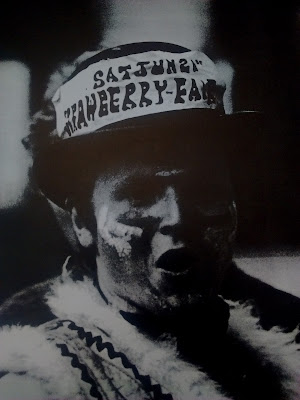 Next up, in the background of this photo we see a poster for "Junior's Wailing," a song by some band named Steamhammer. Released in 1969. Again, this is 50 years ago, and errors could have crept in. But another fairly crisp vote for 1969. 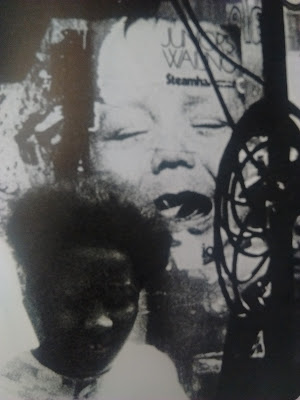 There's a bunch of protest photos, with often fairly distinctive banners and signs. I dare say a dive into the morgue of this London paper or that would turn up the same signs and banners, and thus offer exact dates, but here I am in Bellingham. However, one of the signs was pretty weird, "NO GREEKS IN VIET NAM" so I googled that. 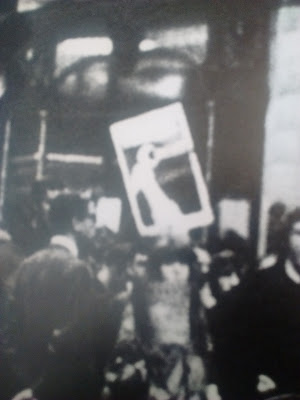 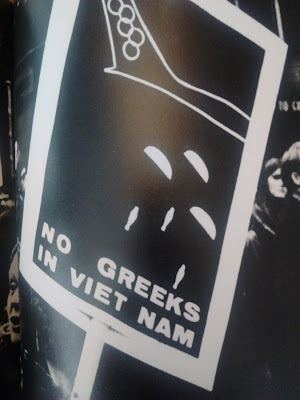 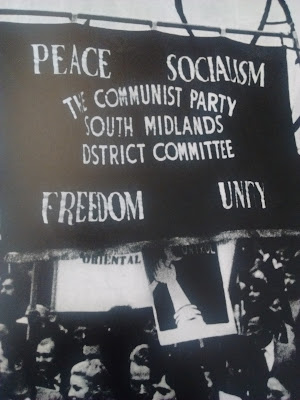 It turns out that there were several signs made by the Poster Workshop which silkscreened posters for people between 1968 and 1971. I dropped them a line after identifying two of their posters in Butturini's pictures, the one about Greeks and another with WORKERS' CONTROL on it (which appears twice in the photos above, although in the background, and obscured.)

Here are better pictures of these posters, from the Workshop web site: 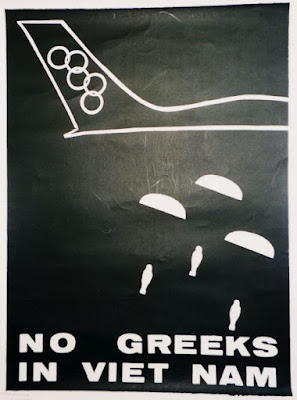 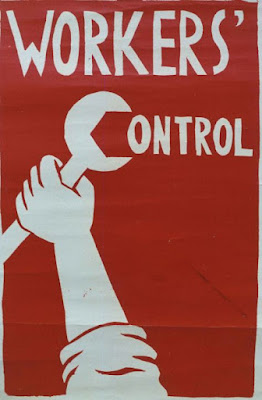 Amazingly a man named Sam Lord replied: WORKERS' CONTROL was printed Oct 25, 1968, and NO GREEKS in the winter and spring of 1969. Again, a snippet of evidence pointing toward 1969 and away from 1968.

The only reference I can find to Greeks in Vietnam is the Greek Australians in the Australian Defence Forces, who.. may have been deployed as a group in the Vietnam conflict? Possibly there was some British outcry against this, or perhaps it means something quite different.

The WORKERS' CONTROL signs, dated on Oct 25, 1968 by Mr. Lord, may well have been printed for the large anti-US demonstration that took place near the US Embassy on Oct 27, 1968 which was located at that time on Grosvner Square, very near where Butturini was to later take all kinds of photos. It is possible that Butturini was in town for that protest, and that some of the material he shot was from that march, and other material from later ones.

UPDATE: This poster also appears in one of the protest photos as well, twice. This poster, and the WORKERS' poster, are at least associated with the Oct 27 march. The online sources show those two posters appearing over and over at that march (although, obviously, any time later more could have been printed, and people may simply have saved their signs): 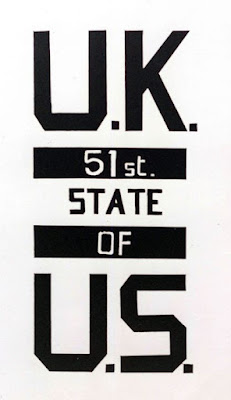 Notably, though, the protestors in this photo seem to be more or less warmly dressed. Given the prevalence of jackets and ties, it's not certain that the season is fall, but it's at least consistent with fall.

There are a couple of other things which I feel ought to have been easy to date, but which I made no headway on. The Guardian's ad campaign is surely well-dated, and the poster for West Side Story would be consistent with some showing of the 1961 film (it is the film poster, not for a stage production) should have turned up something, but there seems to have been no well-documented official re-release of the film at all in this interval. Likely some local theater was simply running it. There's at least one theater at Piccadilly Circus that was running more or less random popular films during this interval. 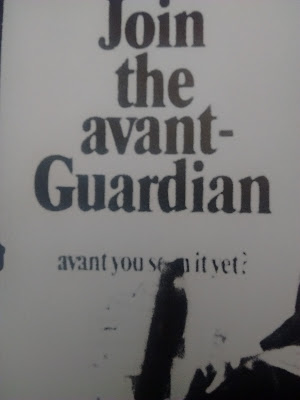 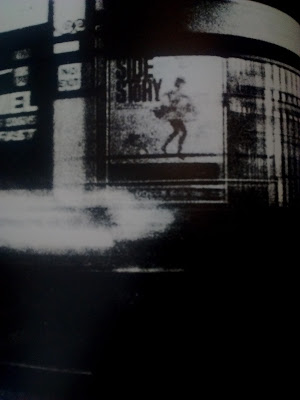 Then we come up against this thing. In the background, the Criterion Theater at Piccadilly Circus. On the front of it, we can see that what is playing now is "The Real Inspector Hound" and that it is "Dazzlingly Funny." I am pretty sure this is the source of my certainty that Butturini shot the thing in 1968, but memory fails and I cannot be sure. 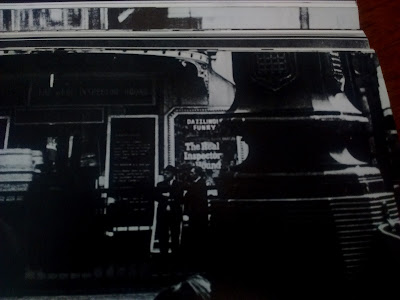 Now, it might not actually be playing at this moment but certainly no production has yet supplanted it.

Various online records, for example here, show that Hound (a Tom Stoppard play) opened in the summer of 1968, and was supplanted by other productions in due course. Notably "Brief Lives" was running over the summer of 1969.

My first thought was that Butturini must have gone to London twice. My second thought was that, possibly, the Tom Stoppard record might be snarled up, and some premiere dates have slipped a year. Perhaps everyone is relying on a single, erroneous, source.

My acquaintance, Dennis Low, who holds an actual humanities Ph.D., checked several other references. A biography of Ronnie Barker (who played in the premiere) also indicates that Hound ran from June to December of 1968. This reference is internally inconsistent: Brief Lives. The text makes it fairly clear that "Brief Lives" (not Hound) was playing at the Criterion in the summer of 1968, but the titles, links, and snippets elsewhere say 1969 very distinctly.

At this point we have either a fairly dramatic screwup in the dating of theater works, or we have two visits by Butturini to London, one in 1968 and one in 1969. The latter may well have produced most of the pictures in the book, which was itself made with remarkable speed (coming out in late fall of 1969.) Those were headier times, though, when people perhaps didn't agonize so much over things.

Dr. Low simply asked the Italians, and after a little digging, they indeed confirmed that Butturini did visit London on a photographic assignment in 1968! One can at least imagine that he took some photos of London that year, and was inspired to return and make something of what he'd seen.
I admit that I kind of hope we've uncovered a problem with the dating of Tom Stoppard's play, but that hope is rather fading at the moment.