Here's a photograph from the Office of War Information: 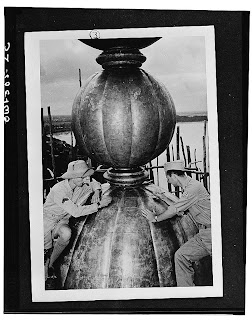 Nice, huh?
Two human figures, one on each side. Two balls, one on top of the other, in some sort of column. Some interesting stuff in the background, that's not too distracting. I think it's printed a little too high contrast, there's a lack of middle tones and an overall harshness to it. Still, the textures on the ball-things that the men are leaning on/climbing are striking and awesome.
This is a great example of balancing forms and areas. Left/right we have the two soldiers, who are in the bottom half of the frame to contrast with the sky above, and we have the two ball forms up and down as well. There's a natural focal point, which the two men are more or less facing, and which isn't quite centered. There's the end of a third ball at the top of the frame, to close things up visually there. There's some things wrong with it, but it's a very strong image. As for engaging the mind, well, there's a whole lot to wonder about, isn't there? More or less, who the hell are these guys, where the hell are they, and what the hell are they doing there?
Evidently they have scaled the scaffolding (see those sticks in the background?) to the top of the Taj Mahal. They appear to be sitting on the base of the finial.
Where's the photographer?
Posted by amolitor at 7:16 AM