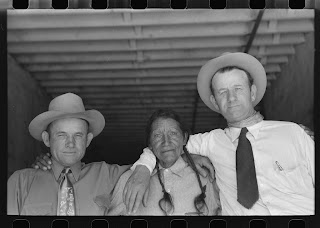 Let's enumerate some facts about the image:

The photographer is a little low, looking up at the taller man to the right and at or slightly below the eyeline of the two shorter men. Nobody in the picture looks very relaxed. They're standing in front of some sort of long narrow room or passage receding out of sight behind, which gives a little visual interest to the background without being too distracting, and gives a dark background against which the well lit subjects are accentuated. The light appears to be making the white men squint a little.

Everyone is dressed in clean clothing, and fairly neat. The white men are wearing hats and ties, and appear to have pressed shirts. The native american's shirt appears clean but not pressed. He wears no hat, and no tie.

The native american appears to be a distinctly smaller man than the two white men.

This is an image from the Farm Security Administration's photography archive by Russell Lee, an FSA photographer, from about July 1940. entitled "Anglo-American and Indian Friends, Taos, New Mexico"

Think about the visual language of this one a little. The angle of view gives a sense of looming, which one could certainly read as a couple of white dudes looming over this Indian they have.. well that they have between them. The juxtaposition of two white guys and one First Nations guy is certainly rife with historical context, isn't it? How would the image change if you made these changes:

Does it work? The photographer probably intended it as a message of racial unity, showing the friendship that exists across race lines. Possibly it even worked that way in 1940, before the Civil Rights Movement and so on in the USA. I don't think it works at all that way now, but it is a powerful image nonetheless. The obvious discomfort of the subjects is interesting to the viewer, it could just be discomfort at being photographed, or it could be more. The people are enigmatic, which is inherently interesting. There's subtext supplied by the viewer, probably a viewer in any era, probably different subtext, but there's a lot of it whatever it is.

As a composition, it's not great. There's no wonderful set of forms here or framing, and the light isn't awesome. The one really good thing is the background. It's interesting and mysterious, the tilt of the ceiling adds a little visual tension to the image. The decision to place the men somewhat low in the frame was a good one, visually.
Posted by amolitor at 5:43 AM