Look at this photo for a minute. At least 30 seconds. Let it soak in, think about it. How does it make you feel? What do you observe about the photograph, and the things in the photograph? 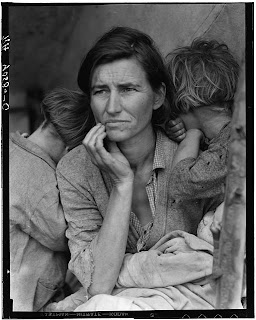 
Why does this work? I hope it works for you. It works for a lot of people.

First of all, it's a portrait. We like portraits, we have a lot of neurological machinery which is devoted to faces, and this is all engaged by a portrait. We immediately start asking ourselves "who is she?" and "what is she thinking?" and we start guessing answers. In this case, maybe we know some answers, and we remember those. Likely, you have at least some specific impressions of what this photo is about. The two older children in frame have interesting postures, why are they hiding their faces? There's huge amount of body language in the image here that we can think about, and guess about. The poses are all slightly awkward, which makes us more curious and interested. It is inevitable that a viewer of this photograph will construct a sort of narrative to fill in a bunch of details. The mind is engaged, the mind has some fun with the image.

Secondly, it's a strong composition. The subject is strongly framed by the vertical pole on the right, and the dark area upper left, and then framed again by the three children, left, right, and on her lap. Finally, her arm gives a strong line leading to her face, the central point in the image which is not itself quite centered but placed in a geometrically appealing point about 1/3 of the way down the frame (textbook). Dorothea Lange was an accomplished commercial portraitist, the strength of this composition is not an accident. The eye is also engaged! Hurrah.

Thirdly, there's a pile of social context around this image. The title suggests a lot of stuff, "Migrant Mother". There is history surrounding this image, the Great Depression, the migration of rural families from the mid-west, and so on. Whether you know it or not, your impression of this photograph is probably informed by this history, possibly laundered through several layers of people.

When the photo was made, it was about specific current events. It was almost a news photograph. In that historical context, it was quite powerful. Some of this remains, mellowed by time and filtered through generations of viewers, but it's hard to completely escape. You, as a viewer, see this image through the lens of that historical context whether you know it or not.

And that's part of why this photograph works.
Posted by amolitor at 10:06 AM