This is one of mine. 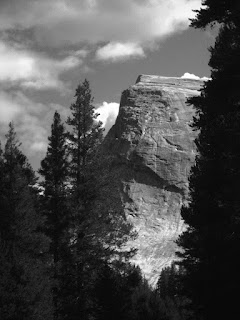 It's not a technically strong photograph, prints bigger than about 5x7 would look all fuzzy and icky. It was shot with some 8 megapixel point&shoot up in Tuolumne Meadows.
Anyways, it's one of the better photographs I've ever made. It has good balance of forms, some nice echoed shapes and, of course, a good subject rendered according to the visual ideas of Ansel Adams. Not, I hasten to clarify, that I consider this photograph on par with his, merely that my handling of the composition and final rendering are clearly informed by a lot of Adams' photographs. In particular, the relatively high contrast (far outside what was actually present in the scene) and the deep shadows.
The dark shadows, high contrast, and especially the high local contrast in the clouds and the rock, give a sense of drama. The low viewpoint, looking (as one must) up at the great rock formation, enhances this. If you're interested, feel free to save off a copy and see what happens when you reduce the contrast, or do some "perspective correction" to reduce that sense of looking up.
Posted by amolitor at 11:26 AM