I've been going on and on lately about authenticity, or something like that. Here's some more thoughts. Buried in here someplace is one of those awful arguments that philosophers are prone to, which boil down to "these two things are the same color, therefore they are the same" which is terrible. These arguments are just stupid when applied to the real world.

However, we're talking here about human feelings, human reactions, and these kinds of arguments do hold some sway here. I'll try to point out the sticky bit when it comes along, so you can judge for yourself.

Painters do a certain thing. They observe, something. The world, an object, some lily pads perhaps. Or a girl, or a mountain. Then they paint a picture, which may be straight out of their own imagination based on their experiences with seeing things, or drawn more directly from the world. It hardly matters. The picture is explicitly a product of the artist. It may be based on something real, but ultimately it comes from the painter. The painter is making with us a bargain: If you will allow me this divergence from what is literal, what is indexical, what is real, then I will in turn pay you back with my labor, my choice of color, my brushwork, my selections of what to place where in the frame, and so on, all of those things which a painter does.

A photograph, as I am fond of repeating, is not this. It is indexical, it is drawn literally from the world. The bargain the artist makes here is somewhat different, and tends to look more like: This was real, it was there, I recorded it. If you will allow me the relative ease of making this picture, there is no brushwork and so on, then I will pay you back with something that is, at least at its base, real.

Then there's a bunch of stuff in between. Photo collages, digital painting, and so on. These are not two camps, bitterly divided, they are two ends of a spectrum.

If the photographer wishes to show you not particularly what is real, but rather what is inside himself, but then declines to do any brushwork, to provide any painterly labor, then is that not something of a cheat?

On flickr you could easily find a few thousand building facades which are utterly generic. There's some sort of pleasing interplay of geometry in them all, which is why they got posted and why they have 758 Favorites and 12,287 Awards. They are, however, generic, they are ultimately representations of what the photographer wants the picture to be. They have left the actual thing itself behind. They are, in a sense, paintings made without any actual painting.

On flickr you can probably also find a thousand photographs of essentially the same sort, which happen to be shots of Aqua in Chicago. As of this writing, this is a very distinctive building. You can take exactly the same sort of boring "abstract facade" photo of Aqua, and wind up with something that is distinctly Aqua. The thing itself is strong enough graphically that it is not abandoned, the photograph remains photographic. In spite, usually, of the photographer's efforts to obliterate the thing itself.

Here is another example. Majeed Badizadegan is a mildly flickr-famous guy who shoots, basically, these pictures: 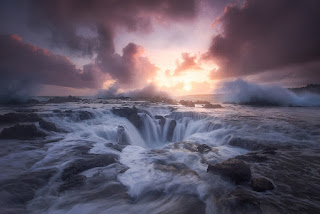 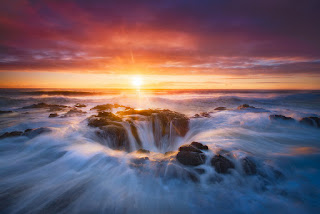 One of these was taken on the Oregon coast, the other in Hawaii.

It is not that Majeed has mined this idea out, and should therefore knock it off (although that too is arguably true), it is that by shooting these two different things in the same way he reveals that he's not interested in the thing itself. He's interested in making this picture, over and over, wherever he goes. He could probably make this picture in Salt Lake City, somehow, and if he was there he'd certainly try. Majeed has eliminated the subject and replaced it with an abstraction. He has drained the life out of the thing he pointed the camera at.

You could argue that these are authentic, that this is indeed what it looks like to Majeed, and that this is his genuine reaction. I find this wildly unlikely, and if true, it's very sad. He takes this picture on every seashore, no matter how far flung. Either he has a tragically limited emotional palette, or I am right. Either way, his pictures have a tragically limited emotional palette and therefore by my lights are not very good.

At this point there's room for a whole essay on how much of this essay depends on the time and the viewer, versus how much of it lies with the artist.

This is not to say that abstraction is a bad thing. You can shoot an abstract sort of a thing, let's say some isolation of shadows on pavement, which is nonetheless the thing itself. When you look at it you don't know where, or whether it was hot or cold, but you do know that those shadows were there on that pavement and nowhere else.

So here is the sticky bit of the argument.

Because the camera is inherently about recording the literalness in front of it, I am going to claim that photographs ought to embrace that literalness. The thing itself should be present. If your aim is to obliterate the thing itself and present only your vision of how a picture ought to look, then you are merely a lazy painter, and not doing photography at all.

For extra credit, note that this is roughly the argument against pictorialism, an argument that I have vehemently protested in the past. I'm going to claim that the argument was a little bit different, and that to the extent it was the same it was often unfairly applied. But more importantly, I am going to quote Emerson (the other one):

A foolish consistency is the hobgoblin of little minds [...]