Ming Thein asks a good question over on his blog. His answer is not wrong, but I don't think he's really on the right track. I am going to essentially ignore what he wrote, but obviously you can and I think you probably should go read it. There are really two questions here. The first is "Why do people say Ming's pictures lack soul?" and the second if "what is soul anyways?" and I think that pondering the first can be helpful in mulling on the second.

First, let me dispose of some other details. I read a handful of blogs and other resourses, and much of what comes to mind is a response to something I read in one of those places. This means that my blog posts will often take the form of "so and so is wrong, here's why" or, occasionally, "so and so is not wrong, but here's an interesting point." If you would prefer not to read this sort of commentary, you will find yourself often disappointed at photothunk. I intend to do more of this, to be honest. While I could be, and have been, coy and simply say "well, I was thinking" that's no good. You deserve to be able to check my work and form your own opinions based not only on what I write, but also on my antecedents.

I'm not a lone genius pulling this brilliance out by the power pure reason. I am a lone genius who exists in a constantly shifting mileu of the other ideas and writing.

Onwards. Let's look at some of Ming's pictures. 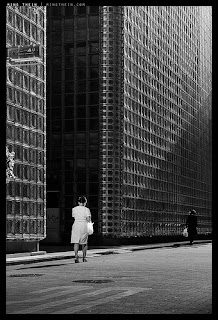 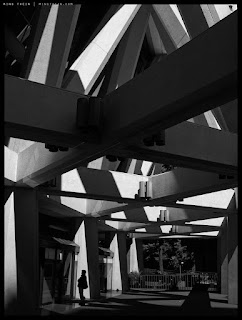 How does he shoot these things? Well, it's pretty clear that he sets up someplace, and then he waits. In one case he's got this diagonal shadow line pointing down to a spot on the pavement, and he needs someone in light clothing to pass over that spot so they'll pop out against that deep vertical shadow. In the other case, he needs someone to stand against that patch of light, clearly delineated, and silhouetted (or silhouettable in post). Then he waits. A few people comply before the light changes and that magic spot he's picked out isn't any good. Have you spotted the problem?

Ming's moment depends on the position of a person in motion, which person will be the "subject". He's setting that person up to be The Thing You Look At, and he's not allowing that person to do anything worth looking at. They have to behave at exactly the right moment and place.

Once you see what's going on, you might reasonably wonder "does Ming do better with stationary people?" and you will find that, by golly, he sure as hell does. Look at this thing: 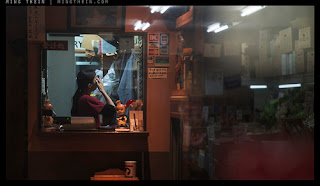 This is a cracking picture. It's very good, and it has tons of soul, whatever that even is. He was waiting for the gesture, the literal gesture, rather than the position. So we see a truthful human moment. Ming, having his subject already isolated as a relatively darker figure on a relatively lighter background, can wait until an actual picture turns up instead of an exercise in geometry. His best pictures, and some of them are really good, are of seated people, doing something. Talking on phones, working, etc. He can set up, isolate them in his standard "dark on light" or "light on dark" and set up whatever geometrical games he likes in the frame and then he can wait for something interesting to happen.

We can understand, we can relate, to the the tired woman(?) rubbing her eyes. The woman in the white dress isn't anyone we can connect with. She has her back turned and she displays no emotional cues at that moment. She's just a person walking down the street, who happens to be located at a cute intersection of lines. The silhouette is very distant, but there is a little body language. We might guess that he(?) is looking at some art, maybe? But we can't see what he's looking at, he's small in the frame, and featureless. Not as generic as the woman in white, but hard to connect with.

Ok, but it's not all people. What about architcture? Watches? Whatever?

Ming still exhibits the same problems. His attention to formal qualities of the frame gets in the way of any genuine emotional content. He may well have some ideas about this building, or that watch, but he doesn't share it with us because too focused on the formal aspects, and given a choice between an angle that shows off how he feels about the thing, or one that shows of the thing's essential character, or an angle that creates some formal arrangement of bits and pieces in the frame, he picks the latter every time.

This is essentially the magic of street photography when it is done right (that is, almost never). The moment that expresses the emotional content coincides with the moment that produces the formalisms, because in the first place the photographer has predicted it and is already in place, and in the second place the photographer is very very lucky (and shoots an incredibly number of frames to produce that luck).

The photographer is balancing the two sides of the equation, constantly. She's plugged in to the situation, to the area, she's taking time there. She is not flying in for a weekend every now and then, she's out there every day becoming sensitive to the kinds of situations that unfold. She knows, in broad strokes, what these people are likely to do in the next few seconds.

That guy is gonna step out into the street and throw his hand up in a second, I'll move to place his sunlit hand against the black van.. there he goes.. clickclickclick..a little left..click. That's the shot.

This process might be unconscious, but it's happening. Note that the photographer isn't parked waiting for something sunlit to appear in front of the black van, she's finding the black van in the moment. She's pasting together the formalisms in the moment by moving the camera.

For people not doing this, trying to make purses out of fluid sow's ears of life, it's somewhat easier. But they're still trying to balance the formalism and the relatable emotional response.

Edward Weston spent, as far as I can tell, all his time working out how to make whatever it is look kind of like a female nude. That would probably be a neat and useful exercise, to be honest. Anyways, his emotional response seems to have been kind of one note, and his method was to balance formalisms with "make it look like sex" and by golly, it worked pretty well.

Sally Mann, as near as I can tell, wanders around looking for things to put in front of the lens (her kids, the bones of a dog, a battlefield) that mean something profound to her. Then she sticks them in front of the lens and moves stuff around until it feels right, balancing god only knows what internal criteria she has. Then she shoots it, and looks at the results, and shoots it again, and again, and again, until it feels right. She's not not unconscious of formal details, and she goes to considerable lengths to correct that sort of thing as well, but in general it's obvious that the emotional result is pretty much the only thing that matters. Doses of sentimentality that would be fatal to non-Southerners.

Ming Thein's problem, if indeed it is a problem (his commenters seem to think it's not, and they are legion), is that given a choice he will always choose formalism over emotion. It is only when he consciously chooses the other way, or is shooting a situation when he doesn't have to choose one over the other, that he does well. In those cases, he does very well indeed. Many of us feel, though, that you'll do better sacrificing formalism first.

If you shoot for emotionalism first, then you may find that the formalisms are good enough, or serendipitously just right after all, or that they at least fall perfectly in to place on their own sometimes.