Your First Book is Shit

Most of your other books will also be shit, but sometimes less so. This is why it is probably a good idea not to venture much on your first book. More on this point in a little while.

Before I start in calling out other people as idiots (which I assure you I will get to shortly), let us examine my credentials. It turns out, to my astonishment, that I have made quite a few books.

It turns out that I've done around 20 books in my life, a figure which surprised me. I'm actually getting to be kind of experienced, perhaps. I've certainly made a lot of mistakes.

25 years ago or so I did a PhD thesis. No design whatsoever, except what was dictated by the prescribed formatting guidelines for theses at Wesleyan U. Organizing the content for 70 pages took 2 years, and this is content that largely organizes itself. The content is pretty good, and has very few typos and mangled sentences.

In the intervening decades I did masses of technical writing, but only a few things that resembled books. Those "books" were largely filling in a supplied template (in this case a literal Adobe Pagemaker template, rather than a written set of instructions/rules). The design was, therefore, someone else's labor, and the organization was supplied. Much of the other technical writing required me to organize the content as well as write it, but there was essentially no design, and so it doesn't really count as "book" making. My exposure to Pagemaker was probably the most formative relevant thing here. Pagemaker, even in the early 1990s, had a lot to teach you about book design.

Of course, you don't write a million words or whatever without picking up a few things along the way.

In recent years I've made some half dozen illustrated children's books for my and various other children. Some hand written, others printed, mostly sewn bindings either quarter-ish-bound or full-bound with cloth and decorative papers. (I do own other colors of bookcloth.) 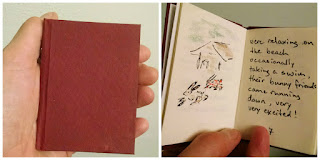 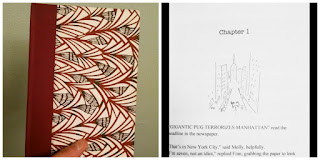 Content? Well, I had to write the things and draw the illustrations. Design? Judge for yourself. There's not a great deal of design, but there's some, and I think I mainly comported myself quite well.

I've also done an eBook on composition which I originally did a full print design for. I learned a lot about print design, but it's probably best that it wound up as an eBook. And then there are various photo books, on blurb and hand made. Here, and here, for instance. Here's a "magazine" of sorts. Perfect-bound, not sewn, with 140 pound soft cover. It's a mess and makes almost no goddamned sense. Also, it's missing a page. I shot it in an hour, sequenced it in an hour, and spent about an hour building it. You get what you pay for? 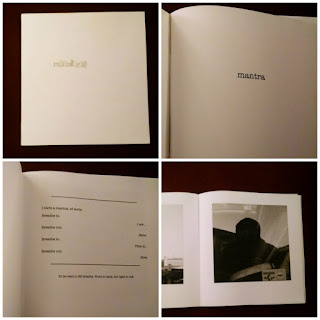 I'm here to tell you, it's damned hard. Most of the books I've done have been, as books, in at least some important ways, shit. I'm a smart guy and know enough to go easy on the design, but it's still just about all I can do to get the pagination right.

Getting out enough of the typos and mangled sentences to make the thing flow as not quite an unprofessional mess? Very very hard. Organizing up 10,000+ words of material becomes unwieldy and difficult, especially for the uninitiated. Sequencing photographs in a sensible way that "reads"? Not exactly a walk in the park.

Which leads us around to some projects from other people.

The hapless Chris Gampat is going to do a print 'zine. The guy's rambling promo video appears to be shot -- literally -- in front of a bedsheet that he could not even be bothered to iron or place far enough back to at least render soft. God help us all, he's on track to get this dog funded, probably because he's recruited some internet-famous photographers with fans. Why he needs $3000 to get started I do not know. The astute reader will note that his kickstarter has essentially no information. Is this going to be a 2" x 2" magazine, or 2m x 2m, or what? All we know is "about 100 pages and gorgeous".

Chris: Listen up. This is your first print thing ever. It won't be gorgeous. It will be an ugly clusterfuck. Partly because it's your first, and partly because you have the design sense of a cow, I saw your La Noir Image mockup. For god's sake, don't blow your kickstarter wad on this.

Next up, Ming Thein is going to do his first book ever. It is equally vague, but it will be gorgeous, it will be a magnum opus, it will summarize all his thinking into one mighty work. Now, I don't believe for a second that he's actually doing a book. This is posturing to produce the desired burst of slavering sycophancy from his cultists, and it will eventually peter out because it is simply beyond the ability of others to produce a book to Ming's high standards, etcetera and so forth. But, let us for a moment grant him credibility.

Ming: For god's sake, do some smaller projects first. Unless you are blessed with an editor and design staff from heaven (see below), with a budget of infinity, your first book will be Shit.

Onwards. Let's take a look at Katrin Koenning's first book, Astres Noirs. Interestingly, I think this might not be Shit. Katrin has collaborated with another photographer, as well as a very snappy publisher with access to some serious design chops. Isn't that interesting. Hat tip to cphmag, and I may have more to say about Katrin later. She's interesting.

Finally, let me throw into the mix Peter Lik's hilariously awful Equation of Time. It might not be his first book, but it's surely his biggest book, and boy oh boy is it Shit.

Peter: Oh, the hell with it. Carry on mate, you're doing bloody brilliant.