Longer-time readers may recall that from time to time I have lit in to a web site called Reading The Pictures which has long been some schmuck named Michael Shaw writing little essays based on pictures from the news, which essays boil down to remarkably stupid signaling of his academically-approved simplistic left-wing politics.

They've updated their format. Now Michael is making videos, in which he chats with one Cara Finnegan, an apparently equally dunderheaded academic, about a picture from the news. They spend many minutes to signal an even more dull-witted precis of his politics. The essays were always just Michael looking at a picture and writing down whatever random associations popped into his head, and then sort of pretending that these would be, I guess, universals? The videos, as we shall see, are much the same.

Pro-tip: Don't host videos on youtube if you're pretending to be, but actually are not, a widely read web thing. YouTube maintains view counts and shows them to the public. Fun fact: My post here will substantially goose Shaw's view count, because my blog is more widely read than his. Which is fucking astonishing because my blog is extremely unpopular among the very very very small set of people who are aware of its existence. For obvious reasons.

As a side note here, we have a whole category of these little web sites, all promoting one another as Necessary, Important, Must-Read, but whenever we get a peek at the actual numbers we see that the actual engagement is so low that they're not even reading one another's Must-Read material. Colberg plugs RtP, but doesn't read it, and vice-versa. Sometimes they give one another little awards, but still, nobody is reading this material, nobody is watching the videos. You'd think they were just a weird little clique of basement dwellers, but as far as I can tell these people are in fact the "Legitimate Academy" here. Michael Shaw has written (deeply stupid material) for Columbia Journalism Review which as far as I know is a real academic journal that some people take quite seriously. These people, astonishingly, have jobs based on this "work" they produce.

You may examine his latest video either on his web site, in this article, or directly on YouTube. I will insert the picture they're talking about here: 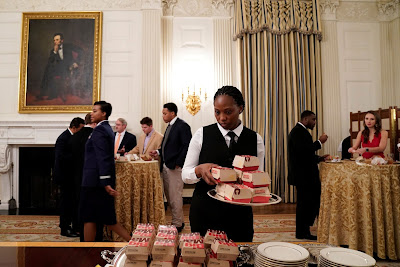 Set aside the video's insanely poor production values and the absolute lack of presence by the principals -- this stuff is actually quite hard. I could not do any better without a great deal of effort and probably some expense. Let us listen instead to what they actually say.

They make, essentially, two substantive remarks in this almost 7 minute video. One is "look, black people" which, to their credit, they do unpack is a reasonable way. The second is "this is a shutdown image!" referring to the recent government shutdown here in the good old USA.

Toward the end the wander off into a discussion of how that's a portrait of Lincoln in the background, something-something negotiation, and look how Lincoln is turning away from the proceedings, to which I can only say what the fuck are you blockheads on about? They, of course, have no point, they just want to compare Lincoln (who successfully negotiated his way into a Civil War) with Trump (who hasn't, yet).

But backing up, they make exactly no case that this is a "shutdown image" merely stating that the episode in which Donald Trump bought fast food for a championship college football team would never have happened except for the shutdown. RtP has made its nut, however tiny, in the last couple of years beating on the "Trump, so Crazy!" drum, so I'm not sure they have a lot of wiggle room here. Honestly, any goddamned thing at all can happen in the white house at any time, these days.

And finally we get to the point that's actually not utterly blockheaded.

The reality is that Washington D.C. the capital district of the USA, is a majority black city. Just barely, now, it used to be 70%, but now it's just over 50%. Regardless, the long-term residents, the people who are born, live, work, have children, and die in DC are mostly black. An hour in the city will reveal to anyone paying attention that it is a city in which less affluent people, African-Americans, tend to the needs of more affluent people, mostly white, who are there as either tourists or government/political workers. The poor, black, residents tend to the needs of visitors both long and short term.

Because Shaw and Finnegan have already characterized this picture as a "shutdown image" they wander off and talk about the the government shutdown (which is over, basically, immigration policy) and racial issues (it is), and some tenuous connection they imagine to the picture. Race, and also race, so, something-something. Right? There's nothing overtly wrong here, except the connection they make from the picture they're talking about. There is no connection, except that these people want to talk about the government shutdown, and to signal how woke they are about race.

Because Finnegan and Shaw see a picture with black people and food in it, they randomly come up with "food desert" and bleat about that pointlessly for a while. Fun Fact: Washington D.C. despite its many flaws rates pretty well on the food desert situation. It's just not that big, and it's pretty dense, so generally people find themselves within a mile of a grocery store. Of course it would be unreasonable to expect the RtP crew to research this, they are clearly shooting this hot mess live and off the cuff, just spouting whatever ignorant remarks pop out of their food holes.

That said, Washington D.C. is a startling fact in the USA. While it does (since 1961) vote for the office of President in that peculiar American way (cf. Electoral College) it has no representation in Congress, while it is simultaneously under the control of Congress. There is a functioning local government, but at least technically, that government must defer to Congress. Their license plates look like this:

This is not a community that is particularly happy with its lot. This is a city of poor people, exploited by the political and national systems that have thrust themselves into the community. You would imagine that at any rate the capital of a place like the USA would be a glittering jewel, a monument to the values we supposedly espouse, but it turns out not so much.

Washington D.C. is a microcosm of the USA's race and class situation. If Michael Shaw and Cara Finnegan had any actual knowledge, they might have cited this picture, by Dorothea Lange, 1936: 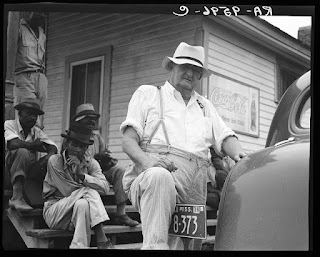 which is maybe the most famous photograph illustrating this particular dynamic. Then Shaw and Finnegan might have made the point about what has, and has not, changed in the intervening 83 years. In 1936 in Mississippi, the Democratic Primary election (a party function, not a government function, but the function that selected the candidates) was whites-only. Since the Democratic Party was, for all practical purposes, the only political party in the South of the USA at that time, the black men in this photograph were, in all meaningful ways, completely without franchise. A lot like the citizens of Washington D.C. today.

The clothes are better. The standard of life is almost certainly better. But African-Americans still work for white people a hell of a lot more than the other way around, and at least in the White House, they still can't vote.

Another cultural touchpoint they might have referenced, while we're poking around, is that McDonald's spent something like a decade of TV commercials marketing aggressively to African-Americans. It is possible, even likely, that Donald Trump (a known watcher of much television) actively believes that McDonald's hamburgers are in fact the favorite food of African-Americans. It's possible, even likely, that he conceived his terrible fast-food feast as a special treat for the young athletes he was hosting.

There's a whole pile of stuff that could have been unpacked there, about television, about mass-media, about race, and so on. You could probably even have worked in something about "food deserts." It's purely speculative, of course, but at least it would have been a fun road to run down a little ways.

But, no, Michael Shaw and Cara Finnegan are explicitly doing a show in which they look at a picture, and simply blather about whatever comes to mind first. Since they are dopes, steeped in contemporary academic culture, all that ever comes out of their noise-making apparatus is noises about race and how bad Donald Trump is. These are interesting and, dare I say it, Important, topics but simply mentioning them with a sadly shaking head does not constitute critical analysis.

In fact, Finnegan and Shaw are exhibiting here exactly no critical apparatus at all. It is, I suppose, possible that one or both of them is capable of doing this, of actually looking at a picture, and talking about its context and thence its likely meaning(s), but they are certainly showing no signs of it here and appear to have adopted a format that is peculiarly ill suited to doing so.