The opposite of serendipity, that is.

We have a detached office structure, which is really the garage at the rear of our lot, backing onto the alley behind the house. This building has been remodeled into a fairly decent office space, and a separate storage space. When I worked, I had my computer and whatnot out there, and spent my days in there. Now that I do not work but my wife does, she spends her day out there. Occasionally, when she is out of the office, I take the space over to use her large and beautiful Apple computer.

Recently, I was in there, working away laying out my cursed Alley book which has been in progress for the better part of a year now, I guess. I pretty much have it conceptually wrapped up, sequenced, written, etc. I am working out cover design.

One of the minor pieces of this is some discussion of the sewer line that runs down the center of the alley, 7 feet down. The sewer lines from our houses to that central line are, originally, ceramic tile pipes which are gradually aging out and failing. When the line fails within the last 6 feet or so, someone's got to cut the pavement in the alley, dig down, and replace it. The creates a characteristic cutout in the alley pavement. 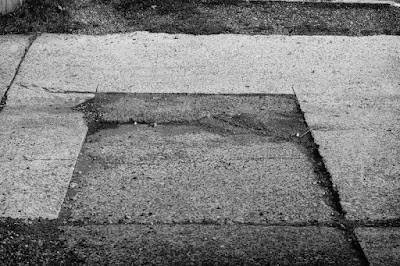 This is the only visual trace of the sewer system, so of course there's a photo of my neighbor's cutout.

So, you may visualize me working away on the cover, and then I perk up, hearing a larger-than-average truck backing down the alley. I pop out, curious, to see what is happening, and lo, they are replacing the sewer line for another neighbor. They are literally making one of the characteristic cutouts right now. God damn it. Now I have to take yet more pictures, and fiddle with my stupid book some more, because this too is part of the story. 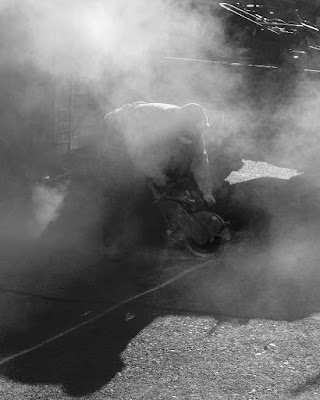