Let me preface my remarks thus: I don't really know a lot here, I have snippets, bits and pieces, and some guesses. But the discussion on the previous notes demands some sort of response (thanks folks!) and so I will record a random assortment of snippets which may or may not add up to something.

John Berger tells us that between Michelangelo and the French Revolution, western painters may be viewed as, metaphorically, painting theater, that they were painting set pieces intended not to reflect nature but to improve upon it. This is indeed a philosophical fragment, which you can see in the paintings (at any rate I recognize the idiom, and assume Berger has gotten the dates right for me). Was this hammered out in tea shops over cigarettes and through shouted arguments? Probably not. Perhaps it arose simply out of painters copying one another's ideas.

Dada, on the other hand, was absolutely hammered out in cafes, with both cigarettes and shouting, as well as written screeds. Many 19th and 20th century Art Movements are supported by lengthy essays detailing the underpinnings, some occasionally written by the practitioners themselves.

"Schools" of Art are, as near as I can tell, some blend of in-the-moment philosophy together with after-the-fact critical analysis. The "theater" model for the aforementioned period of western painting might in fact have been invisible to the painters themselves, as water is invisible to the fish. To us, in the here and now, it is painfully obvious. The blend of these two ingredients varies from school to school, it appears.

The common thread, as I see it, is that there is some underlying philosophy, some set of ideas, that is in play; and at the same time there is a collection of practitioners working from, very approximately, the same set of ideas and playing a game of "Top This!" We see this played out in the most explicit possible way when, in 1832, JMW Turner adds a red bouy to his painting -- after it has been hung -- so that it competes favorably with John Constable's painting hung nearby. How aware the practitioners are of these ideas, how many screeds they write or do not write on the topic, seems to be beside the point.

When this happens, this game, you can spur better and better executions of these underlying ideas. The underlying ideas are clarified, they change, they are altered this way and that, but the general thrust toward better and better work (in some sense) is driven forward sometimes at a furious pace. Competition and collaboration produce growth, clarity, and a whole pile of related works. The pile of works then enables later critical analysis, understanding, of what was going on. One impressionist painting is just a fuzzy picture. 100 of them is interesting, and makes clear what these guys were up to. See also Cubism, although I will grant that 100 cubist paintings, or a million, might not suffice to make clear what the hell they were up to.

I suppose it makes a certain sense that in this modern era in which Art is essentially all conceptual, that competition would naturally turn to having better concepts, rather than superior executions of an underlying concept. A comment on the previous remarks states unequivocally that "a cult of individuality" is the "core directive" to students in at least one institution. If "concept" gets conflated with "process" then the competition degenerates into one of inventing the most absurdly Rube Golbergian process for making a piece of art, which certainly seems to accurately characterize a depressing amount of what we see.

Even if concept doesn't degenerate in this way, you still get work from one artist that is incomparable with the work of other artists. The concept is, as far as I can tell, kind of the base layer, the foundation. Art doesn't go down any further. Without any common foundation, without a common basis, it becomes impossible to compare one artist's output with another. The game of "Top This" falls apart. Constable and Turner had enough shared basis to be able to tell -- instantly -- that they had either won or lost a particular round. Jessica Eaton, on the other hand, has no way to even judge whether "Cfaal 403" is better or worse than, say, Gursky's "99 cent" or Molitor's "Cement Cutter." The comparison would be meaningless. The only metric available is that "Cement Cutter" would sell for $0, "Cfaal 403" for rather more, and "99 cent" for (ironically) $2,480,000. 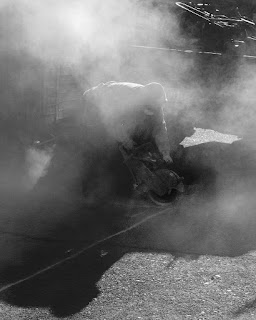 
Perhaps it's not so much post-modernism to blame here, perhaps it is after all an inevitable product of the dominance of Conceptual Art.

Another commenter remarks that there may well be schools, but they are global and diffuse. I agree, to some extent. I see in photography "collectives" at work, invariably doing street photography. They seem to have no particular shared philosophy, other than "well, we both have a lot of followers on instagram and we both think Leicas are cool" but I am perhaps being cynical here. Photography groups seem to be built around either a genre, or around a piece of gear. I have not run across any groups built around ideas of the same general shape as Dada, Cubism, or Impressionism, ideas about what Art ought to do and how best to go about doing that.

The photographic community in particular talks great deal about how best to go about doing it, but very little about what "it" might be.