This is not a review. I have not seen the book, and continue to be not terribly interested in it, although if opportunity arises to leaf through a copy I might do that.

To set the stage: Day Sleeper is a collection of photographs by Dorothea Lange, selected, cropped, and sequenced into a book by Sam Contis, the book then published by MACK. Sam Contis and Dorothea Lange appear to be listed as co-authors on the MACK site. This book has received brief notice in the Wall Street Journal (essentially a recitation of the press release) and reviews from ASX and Colberg, and presumably others. It is, to an extent, the "it" book of the moment.

I'm going to, here, provide a random smattering of details and facts, and draw some connections. I do not really intend to propose any of the connections as causal per se but I think they are of some interest regardless.

You can find a preview glance of the book on the MACK site here: Day Sleeper (click on the book cover).

Among the photos shown there is one of an dead eagle crucified on a barbed wire fence. 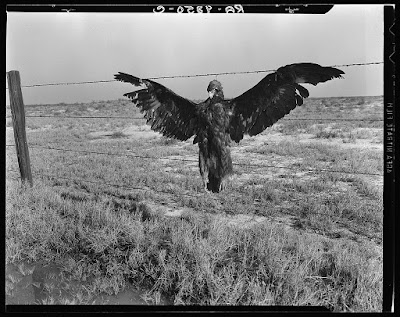 There is here some slight interest. This is not one of the "unearthed" photos "never before seen" that the press release goes on about. It is an FSA photo, shot in 1936, likely on Highway 99 somewhere around Fresno as Lange worked her way up from Exeter to Merced shooting migrant workers in picking season. It is a striking and uncharacteristic photo. Lange simply didn't shoot this kind of thing for the FSA.

One might speculate that it was unusual enough a sight to catch her eye, cause her to pull over, and to record it.

The eagle might have been hung to deter birds, either other eagles or perhaps birds that fear eagles, but to deter them from what I cannot imagine. The field behind appears to be pasture and while an eagle might harass your sheep you wouldn't, by preference, fence sheep with barbed wire. The foreground I think is likely just the ditch beside the highway. Possibly it's just a trophy, or a macabre sense of humor. Anyways, it caught Lange's attention.

The caption describes it as "A very blue eagle" which is probably a joke. Obviously, one can construe the eagle as very sad. Possibly it is a reference to the blue eagle logo of the National Recovery Administration (NRA) which administered parts of the National Industrial Recovery Act (NIRA). This was a very pro-union but problematic set of legal machinery intended to repair the economy. This was quite popular, but was overturned in May of 1935, about a year before Lange photographed this eagle.

It is possible that Lange photographed the eagle as a kind of commentary. She was, after all, working literally daily with the people this agency and law were supposed to help, and was at the time working for a sister agency. One could argue, I suppose, that the NRA was the industrial/urban counterpart of the RA (FSA-precursor) that employed Lange.

It's a stretch, but it does provide, after a fashion, something of an explanation for this weird photo Lange took. It is also possible that whoever hung the eagle might have intended it as a protest against the overturning of the NIRA.

This is not the first time in the modern era that Lange's blue eagle has turned up. It was also the cover of a 2018 album, Furore, by an Italian guitarist named Simone Massaron. Hold on to that date.

Sam Contis did a book in 2017 with MACK, of her own work and some archival material, called Deep Springs which is about Deep Springs College which is one of these tiny weird places where you work at some back to the land shit to build character while studying some no doubt absurdly out of date curriculum. Contis was photographing just prior to the college starting to actually admit women, I think, while it was in the throes of ditching its all-male status.

You can watch someone leaf through the book in this video, I recommend clicking the little gear-shaped tool and selecting a slowed-down playback speed. 0.5 or 0.25. Note the obsession with abstracted bodies, with hands, with people lying down apparently asleep.

Note the dead eagle, held in a crucified position, at time mark 0:50.

If you have not already, I suggest that you look through the preview of Day Sleeper on the MACK site.

I might glibly say that Day Sleeper and Deep Springs are the same book, but that would be unfair. They share a lot. Not just MACK's random approach to picture placement, either. There are hands, there are day sleepers, there is landscape, there are abstracted bodies, and there is a crucified eagle in both books.

Is it a stretch to suggest that Contis made the first book, then saw the album cover, recognized the eagle, and went looking for Lange's pictures? Yes. Is it possible? Yep, the timeline works just fine, and there's absolutely no way Contis doesn't connect the two eagles. The only real speculation here is whether the music album provides a link.

Flipping through the photos easily accessible from the two books we see, pretty clearly I think, that Day Sleeper is made up of Sam Contis photos that happen to have been shot by Dorothea Lange. There was some careful selection, some cropping, and some printing/post involved to execute the transformation, but that's what it is.

The standard critical conceit has been, and no doubt will continue to be, that Contis is shedding new light on Lange here, that we are re-discovering Lange, blah blah blah.

This is bullshit. What we are seeing here is a recapitulation of the Vivian Maier story.

We know what Dorothea Lange was about, she made her statement. She selected this negative and not that one. She printed this, and not that. There is no mystery to Lange as an artist. There is also, of course, a good sized slush pile. The Oakland Archive, which Contis mined, contains 25,000 negatives and it is perhaps notable than even with 25,000 pictures she could not assemble the book she wanted without also dipping into the FSA archives.

What Sam Contis appears to have done here is to construct a simulation of Sam Contis out of materials from Lange, in much the same way that Maloof constructed a sort of Frankenstein's monster sewn together from parts of other photographers out of Maier's materials.

This is an interesting phenomenon, and I dare say as more and more photographers give up taking pictures to "work with archives" we'll see more and more of this kind construct lumbering around. I'm not necessarily opposed to it, but I think we need better language to describe this process. Contis (and Maloof) have constructed genuinely new things, things which should not really be ascribed to the original photographer but which cannot justifiably be fully claimed by the editor.

It is, obviously, possible to construct a whole bunch of different "artistic entities" given an archive of negatives. What should we call these things, and how should we talk about them?