Monsieur Chisholm introduced us all recently to the term intertextuality which, of course, refers to things that go on between texts. I half-heartedly hoped I might pioneer the word intratextual but I am evidently 30 years late to the game. While I suspect that intratextual actually means something fancy and incomprehensible, let us pretend that it means the obvious and simple notion that bits of a thing can refer to and be connected to other bits of the same thing.

At its most basic, it's a collection of events, occurrences, details, that relate to one another to produce a larger, more or less singular, event.

Whatever the objects, the atoms if you will, of a story are, they connect to one another. The hero needs to learn this lesson before he can solve that problem. The heroine needs to speak to this sage before she can successfully slay the dragon, and the dragon must be slain before the prince is rescued. We, as the readers, need to grasp the relationship in space between the front door and the staircase before the scene with the pie makes sense.

The end result is a more or less singular thing. The hero had a journey, the evil was set back on its haunches for a spell, Little Nell didn't make it.

A story, traditionally, is conceived of a sequence of things strung through time. Things happen in order. Sometimes there are parallel paths of time, sometimes time flows differently for different paths, but the common thread tying it together is generally some (subjective?) time. How the story is revealed to the reader may not follow that thread of time. Flashbacks, flashforwards, framing devices, and so on, are all used for dramatic effect, but usually the underlying story travels through time from a beginning to an end.

A poem need not tell a story in this sense, although it may if you like. It, too, is a related series of elements, connected by both meaning and by structure. This line rhymes with that, the meter might create a constant pulse that binds the thing together, but also the theme is consistent to some degree or another. The loved one is, perhaps, tediously compared to a rose, a loaf of bread, and a rabbit, but the loved one remains constant.

In one of my favorites, the dog speaks throughout, from beyond the grave, expounding on the steady theme of how he never really liked his owner.

Why am I (again!) banging on and on here about this same theme?

A few days ago I was walking the dog, in the evening, in the park. The sky was a riot of dramatic cloud. The barely budding branches of the shrubs were adorned with droplets, glowing in the light of the setting sun, and so on. I felt that faint pull to photograph these things, that urge to make some attractive thing from these preternaturally beautiful things. They're not even truly preternatural, they are part and parcel of the world we live in, which teems with astonishing beauty if only you open your eyes to see it.

At the same time, I felt a faint revulsion. Why on earth would I photograph these things? I looked at these things, savored them. I felt perhaps that it was just the usual drone of how one ought not waste the beauty of the world on photos, but rather immerse oneself fully in the moment, blah blah blah. That felt, apart from trite, not quite right.

I did take a couple of record shots. 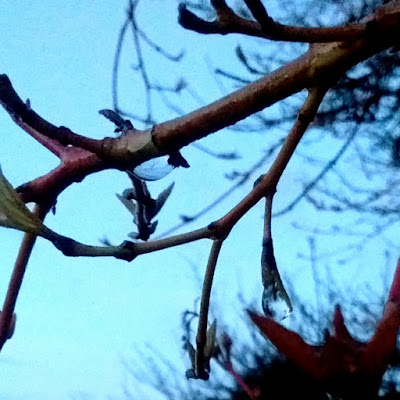 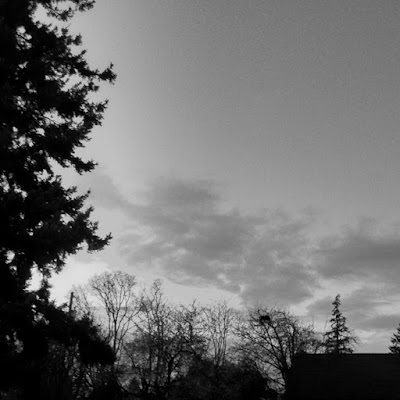 Could I really have made something beautiful? Maybe, maybe not. I could certainly have taken a swing at it. That's not the point, though.

To me, the beautiful object is like a particularly witty turn of phrase, or a particularly well-made rhyme. It's not a story, or a poem, it is at best a fragment I might use some day. To me, even the best job at one or another of these, or at something else, is essentially a well made couplet or a short imagined scene. It's not a complete thing. Absent some sketch of a complete whole into which a picture might fit, I have no desire whatever to mash the button.

Perhaps photography is nearly unique in that its couplets, remarks, and descriptive passages can be seen all by themselves as works of art.

Or, perhaps, we have it wrong and every Dickens novel could and should be also broken up into particularly brilliant passages to be read aloud, out of context.