This is, allegedly, a kitchen: 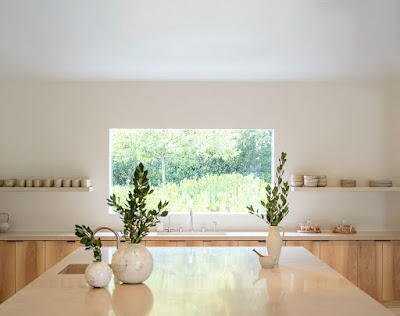 Specifically it is a kitchen (one of several, I think) in a home owned by Kanye West and Kim Kardashian, a home styled by the design firm Axel Verdoort (famous for their sleek minimalist design aesthetic.)

We can notice a few things. The design uses no trim, no moldings. There are no upper cabinets, only a narrow shelf holding a few dishes which match the colors of the kitchen. The color palette is tones of ecru, and green, and that is the totality of it. There are strong converging lines pointing directly at the view out the window, which looks oddly structural, like a not very good impressionist painting. One way to consider the picture is that it's entirely designed to frame the view out the window, which, while formal, doesn't seem worth that much effort.

But back to the kitchen. The styling is maniacal. The cupcakes match the color scheme. The whole thing is intended to create a sense of spaciousness, and of minimal "clean" lines.

What it is not is a useful kitchen. The sink under the window is at least 6 feet from anything else. The kitchen island is at least 6 feet across. Trying to cook anything in this mess is going to be a nightmare of endless hiking back and forth. There's no visible splash guard behind the sink. The single narrow shelf for, apparently, bowls is placed at roughly where the back of the first or second shelf of a standard over the counter cabinet would be. Not out of reach, but also not great for Kim who is 5' 3" tall.

Is this intended as an entertainment space? Setting aside the issue of whether Kanye and Kim are really "chatting with friends while baking pies" kinds of people, the aesthetic is not welcoming. It is far too austere. There's nowhere to sit. Kim and Kanye live largely on the road anyways. They are busy, global, people.

Well, first of all this sort of clean austerity is rather chic in advertsing for kitchen wares. Strong converging lines is absolutely a thing, although mostly the high end brands opt for at least a slightly warmer look, a little more cozy, usually with some people. Sometimes it's a supermodel leaning against a $12,000 stainless steel stove, wearing 5 inch heels and not even slightly pretending to cook.

Anyways, Kim and Kanye's kitchen shows off no appliances, and indeed does not appear to contain any. The point of the picture is austere spaciousness, with a nod toward contemporary kitchen photography.

I conclude that the point of this thing is to be photographed.

Look at the view out the window. It's a layered composition of yellow green/green/yellow-green again. Perhaps it was pasted in during post, or perhaps someone actually arranged plantings to look like this. The important thing is that from anywhere else, it looks different. Whatever was done, it was done to create that painterly "view" from this spot and this spot alone. I'm sure it's very nice from other angles, but just look at where the tree is placed. It is placed exactly where an amateur painter would stick it.

Obviously this whole thing is simply signaling. Kin and Kanye talk a good fight in the Architectural Digest article about how the home was built for their family, for their kids, for living in with their kids, but there is literally no evidence of anything even remotely kid-friendly here. The parts we get to see (which, to be fair, are maybe a couple hundred square feet of many thousands of square feet) are unlivable.

What is interesting to me is how purely visual this display is. Of course Kim Kardashian would build a house designed for instagram, and she has.