The End of the Etceterca

That last post was a bit of a lark. Sorry I ruined Christmas.

What really occurred was this. We took a family vacation for a couple days to Manning Park Resort, up in B.C., to go sledding and do a little skiing and whatnot. Just to go play in the snow, because while we live tantalizingly close to snow, we do not actually live in snow country as such.

It was very pleasant. The weather was fine, the days were bright and filled with cheer. The dog had a very good time, which fact we will revisit shortly, and a good deal of fun was had. There are dramatic vistas, and sometimes there were clouds. Just clouds. Greyish masses covering part but not all of the otherwise beautiful blue sky.

The opening shot is a grab shot through the windshield on the way home.

Nothing is as it appears.

The contrast throughout is boosted insanely, anything grey is smashed to a hard black. All you see in any of the photos, with the exception of the two color pictures, is the tonality of the highlights smeared across the range from black to white. This is actually the genesis of the idea -- it occurred to me that some of the interesting texture of the layers of snow could be brought out to good effect.

The icicles are a regular Manning Park phenomenon. The snow builds up on the metal roofs of the cabins. Icicles form, and simultaneously the snow/ice sheet begins to slide down the roof. The edge tends, for reasons I do not understand, to curve under the eaves, which rotates already formed icicles inwards, often reaching a horizontal angle. More icicles form. Since the roof warms differentially over different rooms of the cabin, you can get effects like the one shown.

This effect struck me as slightly eldritch. 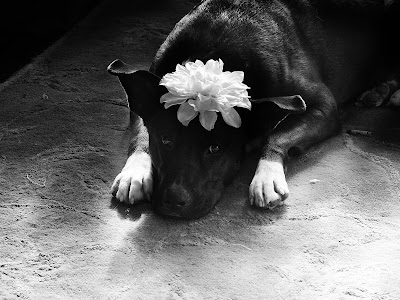 This particular g.d. really likes snow. Really really really. There is a lot of standing at the door writhing and saying Orooooooo ROooORRRr RooooooRRh? over and over and over until someone takes her out for a walk around the loop of road where the cabins are, or perhaps somewhere else, she does not care.

She chews ice lumps with the obsession of a junkie. Her big wet tongue lovingly massages them. She chews them. She chews until her jaws bleed, and does not stop. Being a pit bull mix, her jaws are roughly anvils with a small range of ivory mountains erupting, so she cannot actually injure herself, but it gets disgusting fairly quickly. Then she is made to go back inside and where, occasionally, there is a nap, and then the cycle begins anew.

Long story short, the dog-walking circuit contained several areas that looked a lot like murder scenes by the last day.

Finally, there is a flock of ravens that fly around complaining a lot, looking raven-y. They are trying to cozen snacks out of the visitors but are amazingly prissy little bastards. They inspected, tasted, and rejected some very excellent bread we tested on them, so screw the ravens. No snacks for you. Anyways, they did make an effort to be photogenic and creepy, so I took advantage.

So, I had the eldritch icicles, the high-contrast snow which also looks a little freaky, some ravens, and some murder scenes. The grab shot to open with seemed like a good opener. The result feels a bit like The Shining, don't you think?

And then I thought you know what makes things creepy? cheerful music. Thus was the strangely appropriate Jingle Bells added. Perhaps its not a murder at all, but a terrible accident. Perhaps Fanny Bright survived for a little while, dragging herself desperately through the forest before night fell and the wolves got her.

I confess that I completely missed resemblance of the icicle fan to the fan of feathers on a bird's wing, but I will absolutely accept it. Clearly, um, my subconscious! Also I absolutely did not have Minor White in mind, but I will also accept the antecedent, whether it was intended as a joke or not!

The title is just MFA trash, although it is certainly true that the cabins are on a loop at the end of a road. This also did not occur to me until much later, I was just banging out a derisive title.

I might do a zine. I dunno. It's mostly just a joke.