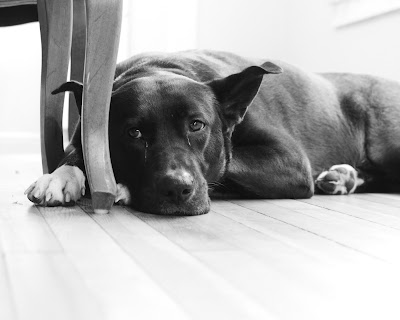 Looking at this photo, it might occur to you the dog is sad which isn't totally accurate. There were children on her couch, making it completely unusable for napping, which is upsetting, but mainly she suffers from RSF, resting sad face.

This is the point of photographs, of most of them, anyways. They connect us to real things. We see a picture, and we unpack it into a real world. We imagine a moment in time, a place, in this real world in which we live, into which that photograph fits.

There are exceptions. If I photograph an automobile race made with toy cars, or a battle scene with toy soldiers, we're likely to snap back to that fictional, imaginary, universe. Many other photos flirt with the line between a staged fiction and some sort of reality (fashion, in which the props are real but the story fiction, etc.) Still, most photos, and certainly photos made explicitly in the documentary mode, will refer us back to some real world. We will attempt to make sense of them in that light.

Along the way, we pick up clues. It seems to be, in fact, that we are hungry for clues. There is some mystery to the documentary photograph which we seem to want to solve, so things like captions and titles assume surprising weight.

If a fellow presents us with a bunch of photos and calls the body of work "Bedford-Stuyvesant" we're likely to try to unpack the pictures into some sort of representation of a Brooklyn neighborhood. If instead he titles it "A Murder in Bedford-Stuyvesant" we're going to unpack the pictures into a representation of a singular, violent, event. Figures who appeared under the first title to be simply a smattering of citizens become, notionally, friends of the victim. The gun which was some sort of vague symbol of violence becomes, abruptly, not only a murder weapon but the murder weapon, and so on.

The first reading is, in the case I have in mind, quite false. That neighborhood simply doesn't look like that, despite all the photos having been taken in the neighborhood. The second reading, if we imagined the same project to be so retitled, is probably just as false. The gun depicted probably isn't the one that shot Davon Williams, Jr. It's possible, even likely, that the random characters shown had no particular relationship with Williams or with his killer.

The falsehood is of a different character, maybe. While Williams was probably not shot with that gun, he was shot with a gun. Some of the people shown certainly could be friends or relatives. The police shown certainly are investigating the murder in question, the location all the photos are taken in is indeed the block where the murder occured.

Would the pictures in this case cast Williams in the role of some "thug lyfe" stereotype? Maybe?

With the gun "explained" by the murder and thus kind of removed from coloring the rest of the pictures, perhaps we might read the baggy clothing and demeanor of the characters as hip-hop style rather than anything more nefarious.

Rather than the guns, drugs, whores, lookit these lowlifes! read the "Bed-Stuy" title leaves open to us, the "Murder" title might suggest a violence is terrible, look at these funky stylish people who were impacted by it.

All this depends, of course, on you. Am I reading Jens Krauer's pictures as buncha lowlifes because I am just a bigot, and interpret hip-hop style as criminal? I think that Jens opened with the gun might get me off the hook here, but it's not necessarily wrong. Maybe it is mostly me.

Anyways, regardless of my issues, these pictures are of the kind that we're going to try to fit into a world, a world we imagine is part of our own, real world. The title gives us a clue, and so we try to expand Jens photos into some notion of "Bedford-Stuyvesant" (or, in my scenario, into the much smaller, briefer, world of the circumstances of a murder). We create this imaginary world, we create a mental construct, to fit the pictures. If we see a gun, that mental construct contains a gun, and maybe a lot of guns.

I could title the dog picture in a number of ways. Lost Ball yields one impression, Mom Is Never Coming Home quite another. In reality, the dog's head is almost completely empty in that shot. There is nothing whatever going on in there except a vague dad clicky box looking at me?

However it pans out, this mental construct is, or at any rate reflects on, our conception of that world. We might conclude that the real dog is genuinely sad, or that Bedford-Stuyvesant is indeed place of violence and crime. We might be right, we might be wrong, but this is a thing we do when we take more than a superficial moment with a photo.

These are things with which we ought to concern ourselves.