Some industry people pulled together a Photographer's Guide to Inclusive Photography which has gotten a fair bit of traction on social media as a thing everyone should download and take to heart and so on. It's somewhere between not bad and pretty good. What it is, though, is rather thin. If we are honest with ourselves, it has gotten traction mainly because it ticks certain boxes, not because anyone other than me has read it.

If you like you can go download it from the official link where you will be asked to give up your email address because for-profit companies like PhotoShelter collect information on pure spinal reflex. You could also try this direct download link which may or may not work for you, but won't ask for your email address.

The content is a series of essays written by members of marginalized communities, all saying the same thing. This is the content:

Do your research, be empathetic, avoid stereotypes.

The single genuinely actionable piece of advice offered in one essay is to show your work to people in the marginalized community you're photographing and have them vet it for stupid.

In the first place, this is all pretty good for all photography and is, um, kind of basic, surely? Ok, I get that there are a lot of people who actually don't get it, and probably need to hear it again, and maybe 198932 more times.

In the second place, while I agree that showing your work to your subjects is a great idea, expecting them to be much help is a stretch. Members of marginalized communities sometimes love the stereotypes. The community members know their community better than you, but they don't know photography better, it's perfectly possible that they'll give you bad advice. They have no magical powers here. But, sure, share your work, and listen.

How could this have been done better?

The brochure contains this picture, in the section on Transgender. 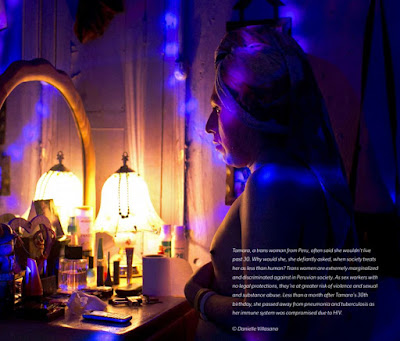 Let us note straight off that while it may not, upon close inspection, turn out to be a stereotype, it certainly reads as one straight off. At a glance, this is a bog-standard "tranny at her dressing table" shot. Arbus shot a number of these and, less subtly, they are a movie staple. We have the dressing table, we have the gender ambiguous figure gazing at the mirror, we have the vaguely lurid stagey lighting, it's all there.

Err, so, what was that you said about avoiding stereotypes?

Is it, though? Upon inspection is it a more intimate and warm photograph than it appears. It isn't just a still from The Bird Cage or Flawless. It's not even an Arbus. The figure's expression, though largely hidden from us, is clearly muted, introspective. The mood is nothing like the outré stylings of the movie trasnsvestite, or the defiant glare of the Arbus victim. The lighting is, but the person is not.

So, we see if we are attentive that the advice given does actually produce a different picture. Arguably not much different, but different. The transgender woman here is relatively unguarded, or at least appears so, in ways that we are not used to seeing in this photograph. It might have been wise to draw attention to this fact in the text, but alas, no such line was drawn. I suppose we can draw it ourselves, though.

More importantly, though, what is missing is some discussion of how to present this picture so as to not appear a stereotype. At first glance, it looks like like the stereotype, and in this context I found it a bit jarring.

Might one choose to simply edit this one out, and if so why? Or why not?

Hanging out by itself it appears a stereotype. If we know her better, perhaps we can slip past the stereotype to the person. If this photo truly reveals something important, let it stand, but have a care with it. Don't drop it in the middle of some glib brochure next to a sentence about avoiding stereotypes, put it in the center of a more thorough essay in which we are prepared for this one by a deeper understanding of the person in the picture.

We can read it as an intimate moment of introspection as she sits in what is, let us speculate, the heart of her world, her home. Or we can read it as a "tranny at her dressing table" shot. To comb those two apart is going to require more than being empathetic, there is an actual process of moving words and pictures around that has to happen.